Review: Brightburn takes a fine idea – what if Superman, but bad? – and stumbles 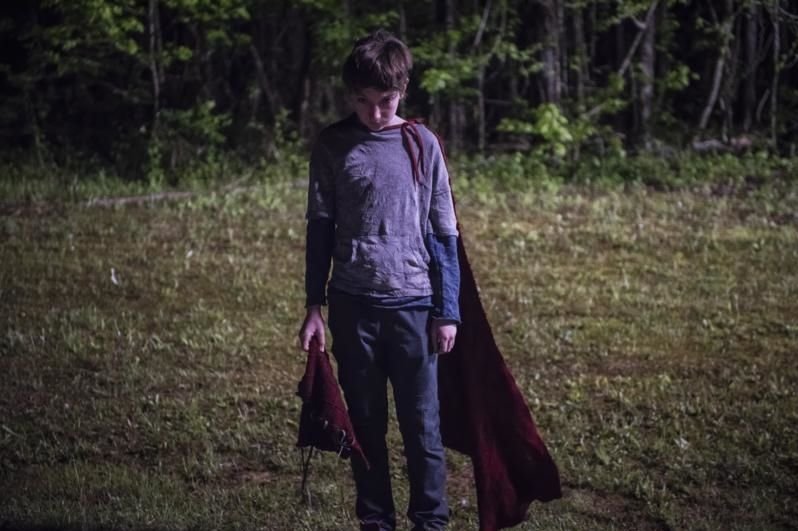 In an entertainment landscape dominated by superhero narratives, a movie like Brightburn was probably inevitable. Its ingenious premise – What if Superman, but bad – is so simple that it can be delivered through iconography rather than words.

All I have is words, though, so here we go: a childless couple in Kansas have their prayers answered when a rocket crashes onto their farm containing an infant boy. Hiding the rocket away, they raise the child as their own, teaching him decency, honour and compassion and hoping things turn out for the best. And then the kid hits puberty and it all goes to hell.

It’s implied that Brandon Breyer (Jackson A. Dunn) has always been a little weird: he’s really smart, and he doesn’t fit in with the other kids at his school. He’s always known he was adopted, but he never knew about the whole strange visitor from another world thing so when he starts sleepwalking to the barn and muttering in an unknown language, its a shock to the system.

His adoptive parents (Elizabeth Banks, David Denman) are supportive and willing to help, but it doesn’t matter. Urges mount. Needs must be met. Destiny will not be denied. And Brandon starts sneaking around town, doing… stuff, and inflicting violent punishment on anyone who tries to get in his way.

That’s fertile ground for a genre movie, especially one that’s already declared itself willing to explore the icky underbelly of the Superman mythos. How do you reason with a hormone-addled 12-year-old who can move faster than a speeding bullet? But having dangled that hook, Brightburn quickly retracts it, stripping all the potential out of the idea like a child pulling the wings off a fly.

Producer James Gunn made cheerfully disreputable genre inversions like The Specials and Super before graduating to the big leagues with Marvells Guardians Of The Galaxy films. Brightburn is the sort of disreputable indie he might have made himself a decade and a half ago, and his version would have engaged with all of that uncomfortable subtext.

Instead, he handed the project to director David Yarovesky and screenwriters Mark and Brian Gunn (James’s brother and cousin, respectively), who clearly aspire to the intimate genre deconstruction of M. Night Shyamalan’s Unbreakable but don’t have the patience for that movie’s slow, deliberate burn.

Yarovesky and the other Gunns can’t even be bothered to explore the world they’re building, settling instead for cheap jump scares and gross-outs, mostly signalled by the appearance of an affectless tween in a creepy red mask. That’s Brandon in his handmade costume, which vaguely references both Spider-Man and Superman. But Brightburn is set in a universe that appears to lack even the concept of superheroes, so it’s strange that he’d devise something like that on his own. (Other than a Ramones T-shirt Banks’s character probably bought at Old Navy, there are no pop-cultural signifiers in the movie whatsoever.)

The material itself produces some interesting ideas, but we’ve already seen better versions of this movie. Josh Trank’s Chronicle did a great job with very similar material, and even Zack Snyder’s Man Of Steel asked questions about how a superior being would regard the puny humans around him.

I wouldn’t be surprised if the Gunns came up with this pitch based on Kevin Costner’s “Eh, humans are pretty much expendable” speech in Snyders film, and the clear delight the director takes in the climactic leveling of Metropolis the most compelling aspect of Brightburn is the distinction it keeps drawing between Brandon’s unblemished, invulnerable face and the fragile, easily pulped bodies of everyone around him. He’s super. We’re not.

Brightburn would have been a lot more gripping had it really leaned into the nature-versus-nurture conflict at its core, or even added a little complexity to the people around Brandon, who are all well-meaning, altruistic heartland folk operating from credible emotional places including the classmate (Emmie Hunter) who pegs him as a creep almost immediately.

But it wants what it wants, and goes for it. Good luck stopping it.