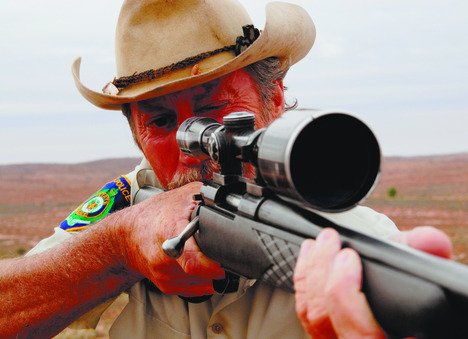 Produced with admirable economy, Cactus spends most of its time locked inside an old Ford GT while a gruff man (Travis McMahon) drives a kidnapped, frightened gambler (David Lyons) through the Outback toward an unknown destiny.[rssbreak]

Writer/director Jasmine Yuen Carrucan’s lean thriller – produced by Aussie icon Bryan Brown, who has a small role as a rural cop – gets considerable mileage from watching these two characters figure each other out. Is the driver a bad guy, or just a bloke doing a job? Does his passenger deserve whatever fate awaits him, or is he just somebody’s patsy?

Carrucan takes her time parcelling out the answers, throwing in a couple of minor complications along the way. A roadside encounter with Shane Jacobson’s beefy trucker proves a distraction, but when Cactus is on track, it feels like a pleasant throwback to the glory days of gritty Aussie thrillers like Wake In Fright and Road Games.