Despite some clever additions to the stage musical, Tom Hooper's adaptation produces many bad, and bizarre, memories 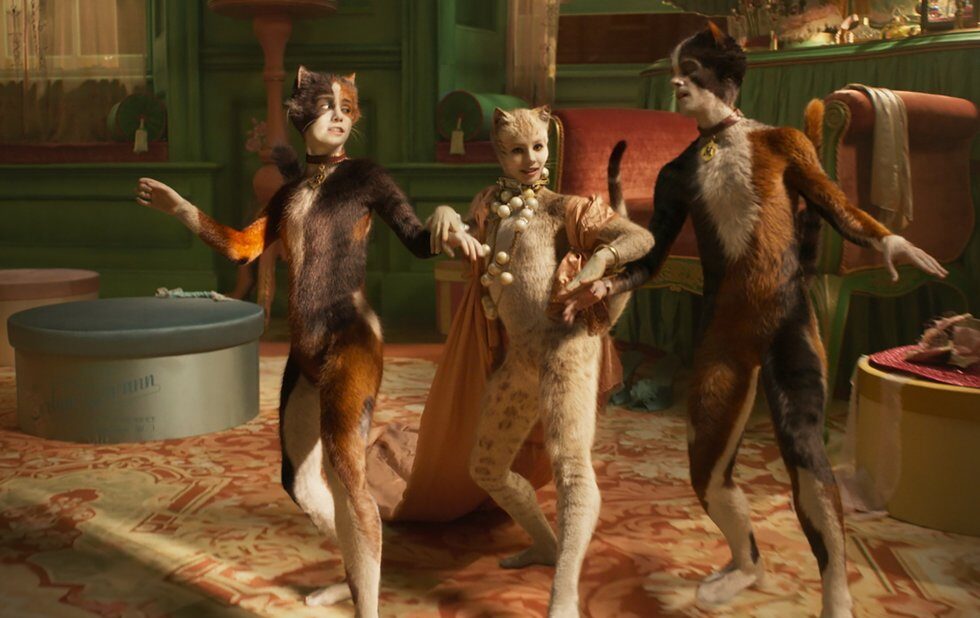 I’m glad I revisited the Cats stage musical last week, because it illustrated how and why Andrew Lloyd Webber’s material works.

With lyrics based on T.S. Eliot’s whimsical  Old Possum’s Book Of Practical Cats, it’s essentially a fantasia about a group of colourful felines who take part in an annual ritual in which one of them, chosen by the august Old Deuteronomy, is reborn. Yes, it’s silly, nonsensical and a very weird Christ metaphor, complete with jazz hands (paws?). But it’s also an entertaining spectacle, with impressive choreography and a couple of catchy, hummable numbers.

Alas, what is successful onstage – for nearly four decades, remember – doesn’t necessarily translate to the screen.

We can suspend our disbelief more easily at a live show, where the magic comes less from computer-generated imagery than from witnessing the athleticism, grace and energy of a room full of multi-talented actors singing and skittering about a junkyard-like set in lively cat costumes.

Film is a more realistic medium, though, and Tom Hooper’s live action adaptation never finds the right look or tone.

The actors resemble neither people in cat outfits nor cats, but rather some weird, rodent-like hybrid. They occasionally get down on all fours, but for most of the time, especially during the dance numbers, they’re on two feet – literally feet, in some cases, but other times paws or even running shoes. In some cases, their faces seem digitally superimposed on CG creatures, rather like those phone apps that morphed your features with those of various animals. It took me a while to figure out what Judi Dench’s beatific Deuteronomy mug reminded me of: the smiling baby-faced sun in the Teletubbies series.

The script, which Hooper co-wrote with Billy Elliot and Rocketman’s Lee Hall, introduces a clever idea at the start. In an in-joke, they let the cat out of the bag – literally. A human dumps a squirming bag onto a garbage heap on the streets of London, and the bag is soon clawed open by a group of felines. Out pops the ingenue Victoria (newcomer Francesca Hayward), and she becomes our guide into the world of the Jellicle cats and their strange rituals.

It’s a smart device that gives us a point of view in a show that can often seem like a disconnected collection of songs. Victoria discovers this universe along with us, and the big set pieces – from Rum Tum Tugger’s (Jason Derulo) raunchy R&B number to the snobbish slob Bustopher Jones’s (James Corden) comic scene – are done for her benefit.

The writers have less successfully expanded the role of criminal cat Macavity (Idris Elba), who now lures members of the tribe away and ominously makes them disappear.

All of this takes place in a London that has been bizarrely catified: instead of a Casino, there’s a Catsino. And the big Jellicle ball – a Dancing With The Stars-type competition – takes place in the Egyptian Hotel, because, of course, the Egyptians revered cats.

So, wait: where did that human from the opening scene come from, then? What world are we in, if not one constructed by humans?

A more high-concept, post-apocalyptic setting might have provided a more interesting backdrop.

These are some of the many small questions that nag at you as you watch it.

What’s impressive is how many small moments still shine through amid the dreck. Ian McKellen’s humanity emerges from his sad-eyed, over-the-hill Gus the Theatre Cat. He and Dench know how to milk every ounce of pathos from their lines.

Taylor Swift gets a flattering, vampish number as Bombalurina, one of Macavity’s acolytes.

And although his role has been reduced in this adaptation, Broadway and ballet star Robbie Fairchild delivers the most lived-in and sincere performance as Munkustrap. Despite the CGI and makeup, he makes sure he connects emotionally to what’s going on in every scene.

As for Jennifer Hudson, who plays the film’s slut-shamed cat, Grizabella, and gets to belt out the film’s best-known number, Memory, she hams it up so outrageously that you feel embarrassed for her.

The fact that her departure from the film is so clumsily done that it feels like an afterthought only adds insult to injury.

Go see the stage musical instead. Or stream the 1998 film of the West End production. Those will give you much nicer memories.