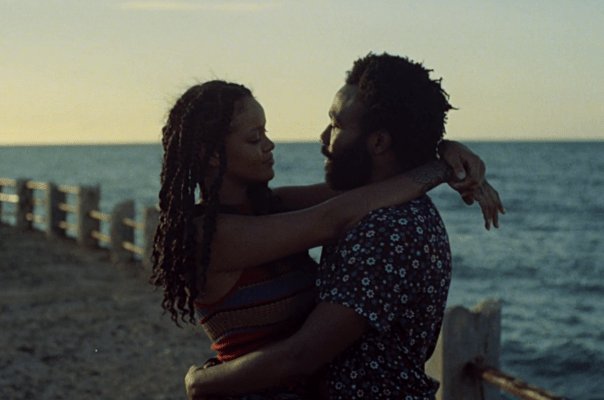 Like the former, the not-quite-feature film (coming in at just under an hour) is built around music by its star – in this case, Glover’s alter ego Childish Gambino. Like City of God, it has slums and melanin.

Yeah, I’m not sure what that latter comparison is about. More obvious inspirations might be Jamaican crime drama The Harder They Come, as well as Terry Gilliam’s absurdist eye.

We’ve seen Glover and Murai take their influences and churn them into something phenomenal and wholly their own on Atlanta. That’s not the case with Guava Island, a breezy lark that borrows recognizable elements from here and there but the result feels incongruous. Guava Island just doesn’t add up to much.

The film, which premiered at Coachella and is streaming on Amazon Prime Video, opens with a lovely storybook style animation. Costar Rihanna narrates the Garden of Eden-style history behind the fictional Guava Island (the film was shot in Cuba), a paradise that lost its way and became all about producing silk under the tyrannical rule of local boss Red (Nonso Anozie).

Meanwhile, a young boy spends his nights playing guitar, trying to come up with a song as beautiful as the girl he’s serenading. He grows up to be Glover’s Deni Maroon. The girl is Rihanna’s Kofi.

The live-action story picks up on the day Deni plans to stage a music festival to give people who work seven days a week some hope and freedom. Red tries to shut it down because a party on Saturday means people won’t show up for work on Sunday.

The plot coasts along on Glover’s amiability and the beautiful grainy 16mm images shot by Atlanta cinematographer Christian Sprenger. All Rihanna has to do as Kofi is smile while Deni plies his charms or look concerned about his exploits as she works at Red’s factory. Rihanna has never been a particularly talented actor. But this is a musical and the Barbadian pop star doesn’t sing a single note. She’s criminally underused, as is Black Panther’s Letitia Wright, who shows up in a couple scenes as Kofi’s grinning buddy.

The ladies are purely decorative in a film that does nothing but orbit around Glover and provide a platform for his musical persona. I’m not sure you can separate Childish Gambino from Deni, who sings Summertime Magic, Saturday and This Is America during the film.

The latter song is repurposed to fit Guava Island’s setting, making a vague point about how no economy is untouched by American imperialism. Introducing that number, Deni says “anywhere where in order to get rich you have to make someone else richer is America.” That passing insight is as thoughtful as Guava Island gets.

Glover isn’t digging deep into his cryptic music’s themes. Instead, he’s grafting his recent tracks onto a different context a sunnier landscape and a different culture. And there’s something queasy about how easily and carelessly he applies the Childish Gambino brand to this context.

The plot about an island’s people revolting against slave labour and celebrating freedom with a music festival is essentially the story of Caribbean Carnival. The finale has steel pans and Rihanna in a regal blue Carnival costume.

Guava Island adapts that Caribbean history – the story of Carnival – but instead of celebrating the sounds from such islands, the film borrows from that culture and makes it about Childish Gambino’s music.

So perhaps it makes sense that Rihanna just looks concerned.