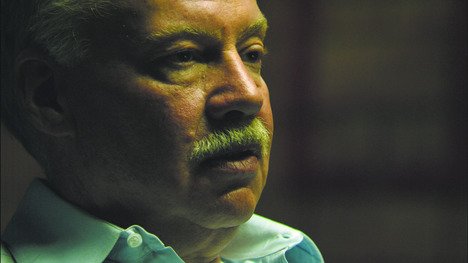 Michael Ruppert says the worlds on the brink of Collapse.

Collapse, a new documentary by Chris Smith (The Pool, Home Movie) is more than it seems.[rssbreak]

On its face, it gives radical thinker Michael Ruppert the Errol Morris treatment – feature-length interview punctuated by archival footage – to argue that the world is going to eco hell and economies all over the world are circling the drain.

It’s effective if you like your arguments one-sided. Ruppert, who turned to investigative journalism in the 70s after he blew the whistle on CIA drug dealing in the U.S. and was thrown out of the LAPD, is very convincing. He chain-smokes and blabs about the evils of oil dependence and finagling financial institutions. But a few words from the dumbly diabolical polluters and climate change naysayers would have made the case even stronger.

What’s fascinating about Collapse is not the argument – in-the-know environmentalists and economic analysts won’t see much new here – but the person. Hunkered down in what looks like a darkened bunker, Ruppert’s a totally fascinating character, passionate, driven and desperate.

Like Naomi Klein, he’s been called a conspiracy theorist, a term I loathe when it’s applied to people who do their research and shed light on capitalism’s patterns and imperialism’s trends – or anything systemic, for that matter.

Ruppert’s really a modern-day Cassandra trying to get people to face up to the obvious.