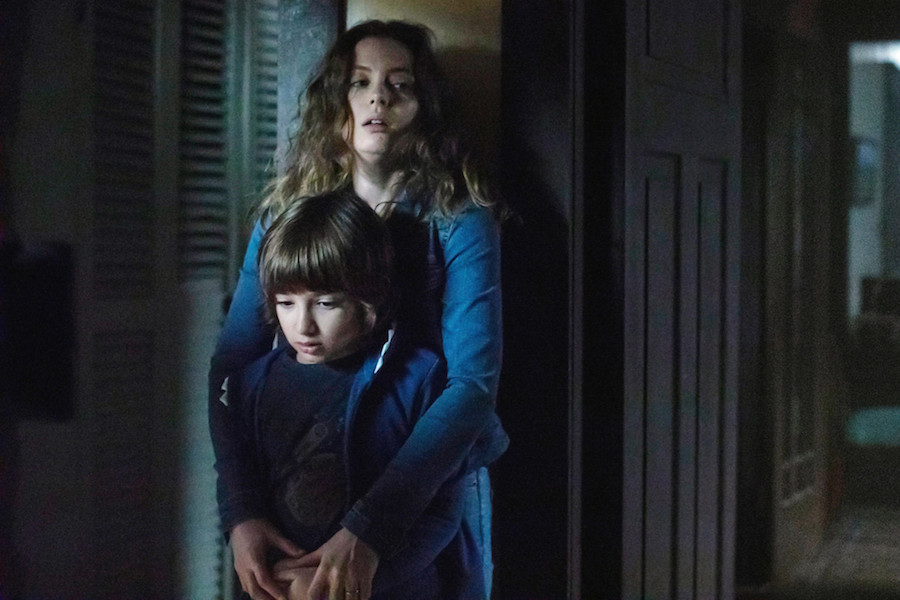 Gillian Jacobs and Azhy Robertson cower in terror from the monster known only as ... um ... Larry.

Come Play is not the first horror movie where people are stalked by an iPad app, but it’s easily the worst one. Expanded from writer/director Jacob Chase’s 2017 short film Larry, it’s the sort of movie where characters spend long stretches of screen time standing in dark rooms waiting for something scary to find them … and the more we understand of the scary thing, the less scary it seems, and the dumber Come Play becomes.

Chase’s short was a simple bait-and-switch shocker, the tale of a parking-lot attendant who finds an iPad in the lost and found at work. The only app installed is a weird children’s book about a lonely creature called Larry, who peeks through windows hoping to find a friend; in a reasonably clever twist, it turns out that the “window” of the story is the iPad itself. Boom! Five minutes, in and out.

Come Play spends about as much time before revealing that same twist: Larry the lonely monster is watching young Oliver (Azhy Robertson, the kid from Noah Baumbach’s Marriage Story) from behind the screen of his smartphone, where that innocent-looking children’s book has creepily manifested.

Why has Larry found Oliver? It’s never explained, although one interpretation is that Oliver, who has a condition that resembles autism, is just lonely enough to have attracted Larry’s attention; maybe Larry, who doesn’t speak and is shunned by everyone who meets him (it?), feels a kinship with the boy.

Or maybe it’s because Oliver’s mom (Gillian Jacobs) and dad (John Gallagher Jr.) are facing the end of their marriage, and the collective anxiety in the house has conjured Larry from the ether. Chase’s script isn’t terribly worried about reasons; he just wants to stage a bunch of scenes where Larry creeps around and jumps out at people. Because that’s all Come Play has to offer: jump scares, creepy noises and a monster named Larry.

I will take a moment here to point out that Larry is a profoundly ineffective name for a monster, and the constant invocations of it actively work against the scariness of the character, which is realized with an impressive mixture of CG and practical puppet effects. Chase also rolls out the exposition with a confidence I would describe as “entirely unwarranted”, in that the more we learn about what Larry is and where he came from, the stupider the movie seems.

I’ll say this for Come Play: no one’s phoning it in. Jacobs does her level best to sell the emotional beats of the movie, and Gallagher convincingly plays a guy who’s actively checked out of his own family, even having a little fun in the parking-booth scene that inspired this movie in the first place.

The trouble with Oliver

But then there’s the Oliver problem. Robertson is kind of terrible in the role, though it’s not his fault; he’s doing exactly what’s been asked of him. Oliver exists to be imperiled; his condition is less a facet of his character than a plot device designed to keep him from being able to tell his parents, teachers or classmates about Larry. I’m sure it’s possible to make a very effective horror movie centred on a neurodivergent character, but Come Play is not it.

Eventually, as everyone figures out what Larry wants from Oliver, Come Play somehow becomes a shameless ripoff of Andy Muschetti’s 2013 thriller Mama, only without that film’s pathos or poetry.

You know what? Watch that this weekend instead. Or Lights Out or The Babadook, from which Come Play also borrows. Any one of them will be a more effective way to spend an hour and a half, and the monsters are considerably scarier than Larry.

“Larry”. Seriously, what were they thinking.

This review originally appeared on the Georgia Straight website.