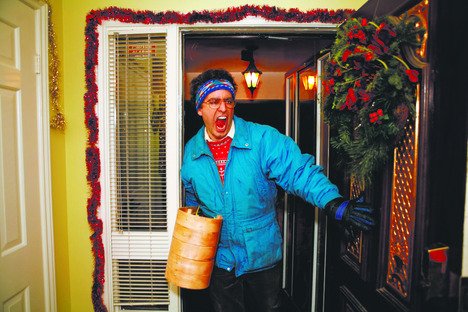 The Daily Shows Jason Jones sleighs us in Coopers Camera.

The people who brought you the very sharp (if little-seen) mockumentary Ham & Cheese return with a painfully accurate study of a dysfunctional family’s meltdown on Christmas Day, captured forever on glorious VHS.[rssbreak]

It’s 1985, so the attendant fashions and hairstyles are almost as tragic as the characters. The titular camcorder is a shabby present from hapless dad Gord (Jason Jones, who wrote the script with co-star Mike Beaver) to his uncomfortably pregnant wife Nancy (Samantha Bee) and deeply broken kids (Nick McKinlay and Dylan Everett).

As friends and relations arrive to drink themselves into confessional rages, all manner of family secrets start spilling out, turning the movie into a wintry Mississauga version of The Celebration – only funnier, and with a cameo from Dave Foley’s penis.