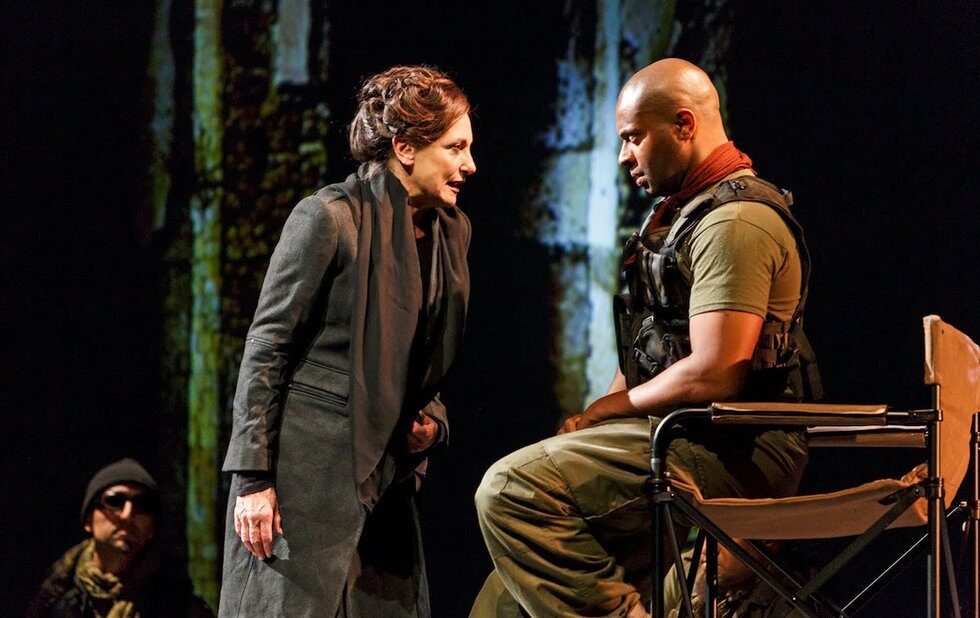 If you missed Robert Lepage’s acclaimed production of Shakespeare’s Roman tragedy last year at Stratford, Cineplex is offering a chance to see it on big screens in their Stratford Festival on Film series. It’s not the same experience, obviously, but it still lets you appreciate the visionary director’s genius.

Lepage’s multimedia marvel, which topped most Toronto best-of-theatre lists last year, borrowed lots of film techniques to tell the story of the titular fearless military leader (André Sills), whose discomfort with appeasing the people once he becomes a public figure brings about his swift downfall.

Onstage, gliding screens mimicked cinematic wipes, and Lepage even ended certain scenes with the theatrical equivalent of iris shots, letting us reflect on a specific character’s thoughts and psychological motivations.

The film’s director, Barry Avrich, was obviously challenged by the project. Lepage’s production worked so well, partly because it was a play using film techniques. There were even occasional live video feeds used in it. Watching a film of a film creates an odd distancing effect.

But some things work very well in this version. Sills’s intense, hulking performance emerges with extra power, close-ups making us wonder early on whether he’s suffering from PTSD. His Coriolanus isn’t the most likeable man, but seeing Sills give major side-eye to his antagonists and watching him melt when he sees his loyal wife, Virgilia (Alexis Gordon), makes you understand his conflicted nature.

Cocktail bars and restaurants still provide amusing backdrops for scenes where a lot of information is imparted, and the production’s funniest section – involving text messages – works just as well on a big screen as it did onstage.

The supporting actors also get to shine, especially Tom McCamus as Coriolanus’s smooth-talking advisor, Menenius, and Stephen Ouimette and Tom Rooney as the manipulative tributes Junius and Sicinius. The three of them deliver a master class in ensemble acting, and it’s a joy to have their performances immortalized on film.

On the other hand, Lucy Peacock’s Volumnia, Coriolanus’s smothering mother, is too shrill and over-the-top onscreen. The performance worked in the theatre, where Peacock’s cagey declarations elicited big laughs from the crowd it’s just too much here.