TV review: Couples Therapy is a doc series with no clear villains

Slickly produced Showtime series about four real-life couples is predictably slow and inscrutable, but is full of illuminating breakthroughs 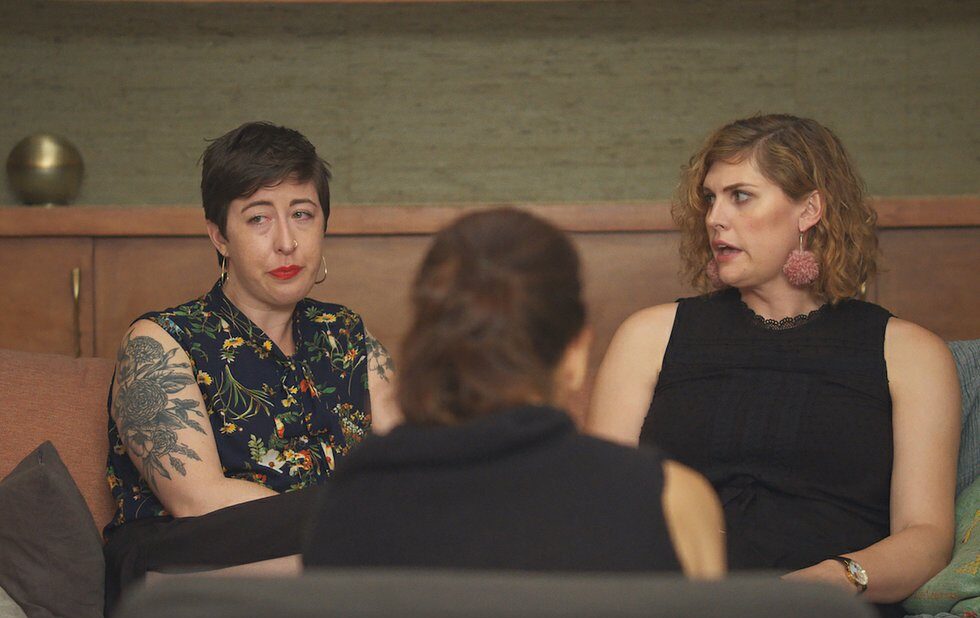 There are no villains in Couples Therapy, Showtime’s new docu-series about a therapist and her beleaguered subjects. Except maybe for one.

The first couple we meet in the pilot episode has been married for 23 years. The husband, Mau, is a square-jawed Chris Messina-type who radiates Wall Street wheeler-dealer energy.

“I could get her to do whatever I want – but that’s not what I want,” Mau says of his wife, Annie, with a perfectly straight face. (God love him.)

“What I want is for her to do whatever I want without me having to make it happen, you know? Like, I want a glass of water, and it’s there, waiting.”

But that’s also a testament to the power of this series (from Josh Kriegman, Elyste Steinberg and Eli Despres, the creators of the 2015 documentary Weiner), which follows four couples’ traffic upon the stage that is Dr. Orna Guralnik’s real-life New York office.

Couples Therapy shares a name with a VH1 series that ran from 2012 to 2015 and featured the relationship troubles of such luminaries as Jon Gosselin, Janice Dickinson and Scott Stapp. But instead of falling back on a reality-show treatment, the nine-episode documentary takes a more restrained approach, in a style as smooth, soothing and flatteringly lit as a fancy Manhattan therapist’s office.

Over the course of the two episodes sent to critics, we get to spend a few minutes with the featured couples – brief snapshots of an often-inscrutable whole.

The unraveling of mysteries – not just who’s right or wrong in a given situation, but what got each couple to that point and what’s driving each client’s feelings and motivations – is at the heart of the action, while Guralnik, with an immovable poker face befitting her position, judiciously reaches out to tug on loose threads in the conversation.

The reveals are somewhat slow, something anyone who’s been through therapy themselves will not find surprising – but the breakthroughs are illuminating.

Desean and Elaine, at first glance, seem like your standard married couple after a decade of rubbing one other the wrong way. He says she calls him too often at work she says he’s disinterested in their marriage. He says she never wants to socialize she says she’s “saving his life” by telling him not to drink or party.

Guralnik seizes on that: “You strike me as very intentional about the way you live life, but as a psychoanalyst, I always wonder what you’re afraid of.”

Gradually, Elaine opens up about her “volatile, violent, toxic” home life surrounded by substance abuse, closely followed by an abusive romantic relationship when she was young. “What’s less obvious is that you were saving your own life,” Guralnik says. “There was so much chaos and violence around. Your life was in danger.”

It’s a puzzle piece snapping into place, but still far from a neat little bow. None of these conversations come with easy answers.

That’s underscored by the case of Sarah and Lauren, who arrive in Guralnik’s office after two years of marriage. Sarah desperately wants to start a family, but Lauren transitioned not long ago and doesn’t feel quite settled enough in her life to become a mom. The situation’s messy, but you feel for both of them, even before you watch Lauren reach forward to wipe a tear from Sarah’s face, and her wife half-chides her for making the makeup smudge worse.

You also feel for Guralnik, despite her veneer of calm authority. The filmmakers weave in footage of meetings between the therapist and her clinical advisor, in which you see the toll the “overwhelming sense of responsibility” from her work takes on her.

“So much is put on the notion of ‘couple,’” Guralnik laments. “Another person will never be what you’re fantasizing them to be. The fantasy is always, at some point, going to exceed what’s there, and then there’s a fight.”

Her advisor’s reply: “Our job is to deepen our understanding of their dilemma, and nothing more.”

The filmmakers take a little extra time to follow their subjects into Guralnik’s office, shadowing conversations in the waiting room and briefly back out into their homes, offering tableaux of the couples watching TV in bed or sitting on the couch reading.

It generally feels more like padding than colour – a sequence where all the couples describe what a painting in the waiting room looks like, Rorschach-test-style, is kind of immersion-breaking – but there are moments that pack a punch.

“Can you behave yourself? You don’t get to be the bad guy,” Annie chides Mau in the waiting room.

“I think someone has to be the bad guy, otherwise these people can’t define themselves,” Mau says, presumably referring to Guralnik. “They would just be lost.”

Christ, what an asshole. But he’s got a point: Villainy makes it easy to carve a cohesive narrative out of a tangled situation – and let an outsider think they’ve gained the moral high ground by picking the correct side.

But, as the show prompts us to ask with each new fragment of information, can you really take a side in a lovers’ quarrel without hearing the full story? Or is somebody getting the bad-guy edit – on TV or in real life?