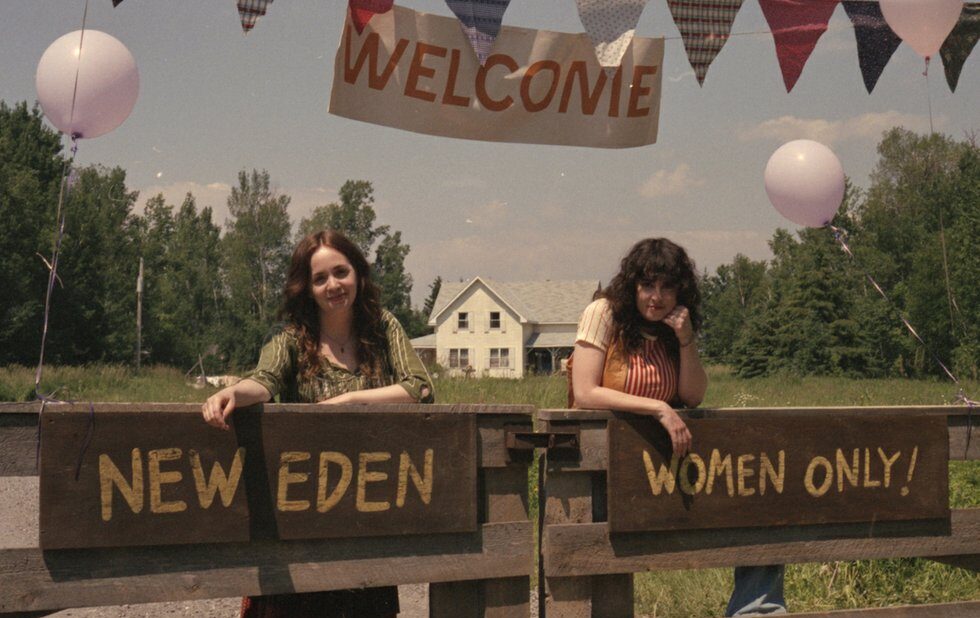 It’s not easy to describe Crave’s new series New Eden. You don’t want to give away too much of its story, and you don’t want to ruin the jokes. So I’ll just say it’s an incredibly ambitious project that does exactly what it wants to do from beginning to end, and is also very, very funny.

Written by its stars, Kayla Lorette and Evany Rosen, New Eden is a comedy about two dysfunctional women who established an all-female cult in the late 70s, more or less by accident. See, the little rural British Columbia commune created by cranky heiress Katherine Wryfield (Lorette) and redneck idiot Grace Lee (Rosen) was supposed to offer comfort and community to the women who wound up there. They were going to keep bees, sell honey, embrace newcomers. The whole alien-goddess-worshipping thing just sort of happened. Nobody’s perfect, right?

But in addition to the blatantly ridiculous cult stuff, Lorette and Rosen are also crafting a very specific riff on salacious true-crime television of the 90s, and a remarkably sharp commentary on perspective and narrative. The show tells its story through the lens of a fictitious 1992 true-crime show called New Eden: When Women Sin, letting us know we’re seeing one very specifically curated version of the truth. (There are at least two other narratives that come into play over the course of the series, but it’s better that you discover them for yourselves.)

Director Aleysa Young painstakingly re-creates the look and feel of the era’s celluloid and videotape – the on-screen text is its own running gag – and much of the show’s comedy comes from the disconnect between content and packaging: as hard as those fictional filmmakers try to shape their footage into a salacious narrative about calculating women tempting their sisters into depravity, it’s clear that Katherine and Grace have no idea what they are doing as cult leaders they just sold a bunch of similarly lost souls on a ridiculous mythology and had no idea what to do next.

And if you’re wondering why anyone would make a documentary about a cult where nothing bad happened… well, that’s part of New Eden’s longer game, which builds genuine tension by mixing expertly realized “archival” footage of the commune with contemporary talking-head interviews with Katherine and Grace in prison for a crime that takes its time coming into focus.

It’s a complex juggling act in theory, but Lorette, Rosen and Young make it look easy, celebrating the eccentricity of their weird antiheroes – and the deep bench of their supporting cast, which features Caitlin Howden and Leah Doz as former members of the commune, Ronnie Rowe Jr. as an understandably pissed-off Vancouver newspaper editor and a host of Toronto comedy talent as various reporters, lawyers and bystanders. (There is so much talent here that the show occasionally spends a little too much time celebrating it the middle episodes get a little baggy, which is about the only complaint I have.)

And at the centre of it all, Lorette and Rosen – who ran the improvised comedy stage show Network Notes, and whom you may have seen on Kim’s Convenience and Picnicface, respectively – play out their quietly ridiculous duet as New Eden’s codependent protagonists, whose unlikely bond leads to fellowship, community and at least one unfortunate death. Look, these things happen.