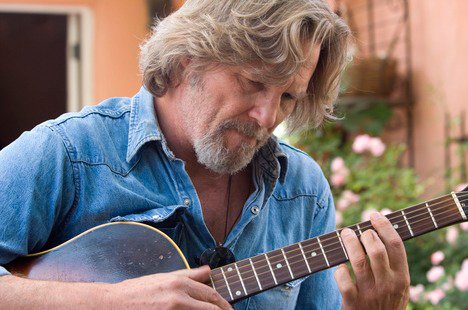 Jeff Bridges sings the "I want an Oscar" blues

You may not have seen Crazy Heart yet, but you already know how it goes. Scott Cooper’s factory-issue melodrama about an aging country star is all prefab despair and redemption. It’s the kind of movie actors make when they want to win themselves an award.[rssbreak]

This may well happen for Jeff Bridges – unless George Clooney’s Up In The Air momentum can sustain itself for another few weeks. But the way Bridges inhabits the role of Bad Blake, a broken-down star coasting on what remains of his legend and charm, you get the sense that a shiny statuette was the furthest thing from his mind while he was making this movie. He’s been given a character worthy of his range and his commitment, and he’s thrown himself in body and soul.

Maggie Gyllenhaal, in a smallish role as a single mom who tempts Bridges’s road warrior toward domesticity, is equally skilled at investing her generic character with weary gravity.

There are no surprises in Crazy Heart – except possibly the identity of the actor who turns up as Bad’s former protege. Cooper, who adapted the screenplay from the novel by Thomas Cobb, stages every scene with workmanlike proficiency. But Bridges and Gyllenhaal make this generic effort worth a look all the same.