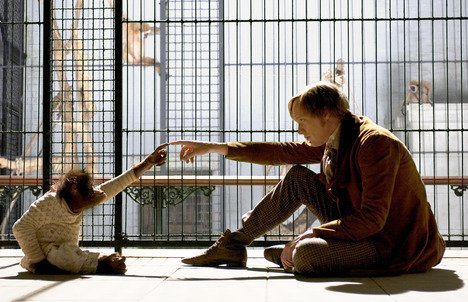 There’s a ton of great stuff in this biopic tracking Charles Darwin as he lurches towards completing On The Origin Of Species.[rssbreak]

Almost all of it has to do with the science. Director Jon Amiel brings Darwin’s ideas to life in spectacular ways. A CSI-type time-lapse probe into a rabbit hole is mesmerizing. Darwin’s encounter with a human-child-like chimp explains everything about what propelled his thinking.

Unfortunately, Creation is more about the relationship between Darwin (Paul Bettany) – who suffers from a mysterious stomach illness and plays favourites with one of his daughters – and his god-fearing wife, Emma (Jennifer Connelly). Even the epic battle between God and science is played out between them.

When the focus is on the emotions, Creation – which opened last year’s Toronto Film Festival – slides into melodrama. But when the ideas take the spotlight – medical practices of the period, natural science, the death of God – it’s fascinating.

Either way, is it possible that Darwin – considering everything he went through and the political sensitivity of the project – didn’t personally carry his single, handwritten copy of the book to his publisher but instead put it on a delivery wagon and waved it goodbye?