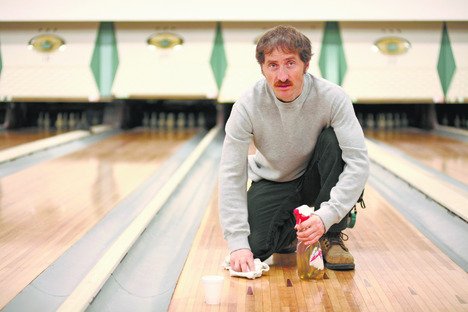 Emmanuel Bilodeau will bowl you over as an isolated father in Curling.

Instead, it’s a formally rigid, visually stark tale of a father and daughter living in near-isolation in a tiny Quebec town – two people who’ve retreated into a very small space and can’t find their way out.

Jean-François (Emmanuel Bilodeau) works odd jobs at a motel and a bowling alley, rebuffing his co-workers’ attempts at conversation. Meanwhile, tween daughter Julyvonne (Philomène Bilodeau) drifts into a world of her own, encountering strange things in the woods behind their house – a tiger, a quartet of frozen corpses – that may or may not be real.

These sound like the trappings of a horror movie, and in less confident hands Curling might have gone in that direction. But Côté has different goals he wants to show us the ways people protect the ones they love, and how that impulse can lead to an unnecessary withdrawal from the world.

There’s hope in this film you just have to look for it.