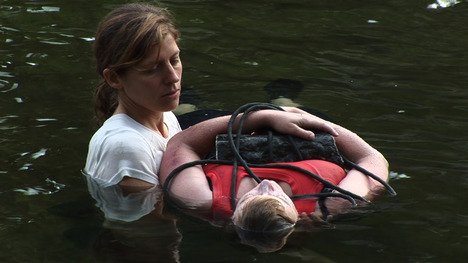 If its premise were not so terrific, Deliver wouldn’t be so profoundly disappointing.[rssbreak]

Jennifer Montgomery and her cast of like-minded experimental filmmakers set about to make a female version of Deliverance, John Boorman’s classic meditation on masculinity. It’s potentially a rich idea, but it collapses. Bad writing will do that.

The story faithfully replicates the original film. Four women head to a river, in remote New York state (not Georgia) in this case, “because it’s there.” We don’t find out very much about them. Jay (Jacqueline Goss) has a dull relationship with a guy who has filmmaking delusions of grandeur, but musician Meredith (Meredith Root) and eventual rape victim Bobby (writer/director Montgomery) are ciphers. And we have no idea what’s driving Lou (Peggy Ahwesh), their leader.

Compared to counterpart Burt Reynolds, Ahwesh has zero charisma, and though that may be the point, you really have to work to get it. Jay can’t fire a weapon, but the connection between that and the strictures of femininity is vague.

And the rape sequence – which in Boorman’s original triggered a groundbreaking inquiry into rape and representation – is inconsequential as a commentary on gender.

The dialogue after the rape – at the hands of female locals, whereupon the women decide not to go to the police – shows some political acumen about sexual assault, and there’s some buried message in the choice of sending all the survivors to a birthing clinic, but it’s painfully half-baked.