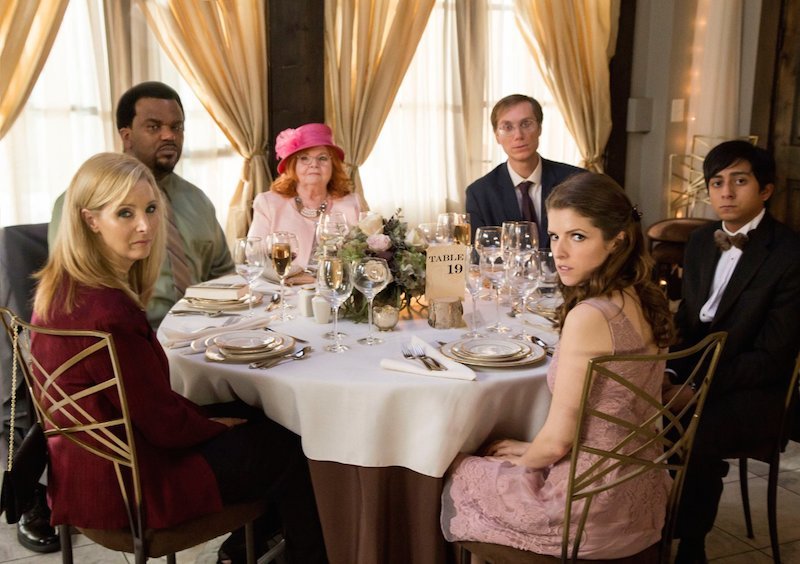 Set at an event wedding on a northeastern island, Table 19 is an ensemble comedy with a lot of good ideas that never pay off.

Jeffery Blitzs first feature since 2007s Rocket Science hes mostly been directing TV since then tracks the chaotic lives of the guests assigned to the misfit table, each of whom has one big secret or one burning desire. And each of them will be validated in some way before the day is out, because thats the kind of movie this is.

Blitz, who wrote the script from a story he conceived with Jay and Mark Duplass, has assembled a terrific cast, most of whom hes worked with before: Anna Kendrick, whom he directed in Rocket Science, is the best mans angry ex The Offices Craig Robinson is a grumpy diner owner in an endless argument with his wife (Lisa Kudrow) the original Offices Stephen Merchant (also on screen this week in Logan) plays a very awkward ex-con and Andy Daly from the brilliant Review With Forrest MacNeil turns up in a bit part.

Nebraskas June Squibb and The Grand Budapest Hotels Tony Revolori round out the principal cast, and everybody makes an effort, but for all the pratfalling and cake-dropping and tearful personal revelations, Table 19 just doesnt come together. The structure is the problem. Blitz is so intent on arranging all of his pieces that he winds up driving every beat home with sledgehammer force.

Oh, there are a few decent laughs. Kendrick has a great early scene with a flirtatious Australian (Thomas Cocquerel, doing a pretty good Chris Hemsworth), Robinson and Kudrow are great together, and Merchant can bring the house down simply by grinning which he does about half a dozen times.

But the deeper feeling Blitz is chasing never emerges.