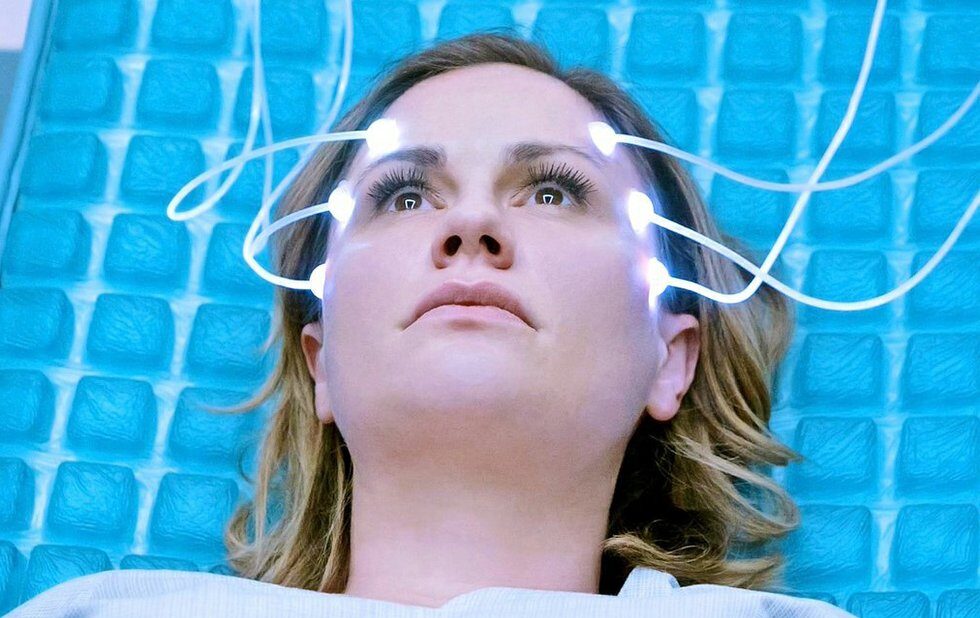 Anna Paquin seeks an escape in Philip K. Dick's Electric Dreams. Or does she?

One can’t help but think the 10-part anthology series Philip K. Dick’s Electric Dreams is a blatant attempt to coast on the success of Charlie Brooker’s Black Mirror. Both shows tell stand-alone science-fiction stories with a pessimistic point of view both shows have glossy production values and big names attached both shows are English with a smattering of international actors.

But here’s the twist: I think I like Electric Dreams better.

I’ve never been a huge fan of Black Mirror, which is so rigidly formulaic in setting up a story’s premise, spinning out its worst possible outcome and then dropping a sardonic twist we’re just there to see how bad things can get for the protagonists.

With the exception of last season’s lovely San Junipero, which had a wish-fulfillment warmth that made its big reveal seem not only meaningful but optimistic, I just find the whole thing increasingly sour. (Full disclosure: I haven’t watched the latest season, which my colleague Glenn Sumi really liked.)

Anyway, back to Electric Dreams, which aired on Channel 4 in the UK earlier this fall and was teased by Space in November after the midseason finale of Star Trek Discovery. The show gets another “sneak preview” screening on Space this Monday (December 25) at 10 pm, following the Doctor Who Christmas Special.

Produced by Justified’s Michael Dinner and Outlander’s Ronald D. Moore, among others, the show freely adapts 10 short stories by the author who gave us the replicants of Blade Runner, the head-spinning identity issues of Total Recall and the eerie Pre-Cogs of Minority Report.

The lure of Dick’s fiction was the way he folded hard-SF concepts into stories about tormented, self-doubting protagonists his ideas are cool, especially if you’re high, but the fragile humanity of his heroes is the thing that makes the stories resonate. And the lure of Electric Dreams is in the way its writers and directors reconfigure his decades-old stories into drama for a 21st century audience.

Crazy Diamond, the episode airing on Christmas Day, nicely exemplifies the show’s approach to its source texts. Ostensibly based on a short story called Sales Pitch, about a door-to-door sales robot that won’t take no for an answer, Tony Grisoni’s script retains only flashes of that idea, tucking it into a surprisingly subtle mid-life crisis drama that’s also a sci-fi caper thriller.

Steve Buscemi plays middle-aged scientist Ed Morris, who works at a “spirit mill” manufacturing souls for artificial humans called Jacks and Jills and has what looks like a nice little life in some unspecified near-future America.

Ed and his wife (Julia Davis) live in a townhome near the coast, and their largest worry is erosion … until Ed meets a Jill (Westworld’s Sidse Babett Knudsen) who needs his help to extend her limited lifespan. And if that sounds familiar, it’s supposed to: it’s a riff on the replicants’ dilemma in Blade Runner, teased into a story of its own.

Similarly, the episode based on Real Life (airing January 7 on Space, when the show settles into its regular time slot of Sundays at 10 pm) refashions one of Dick’s early virtual-reality stories into another hybrid. Anna Paquin plays a guilt-ridden future cop whose pharma-tech executive wife (Rachelle Lefevre) offers her a virtual-reality “vacation” to break her out of her obsessive, self-destructive routine and winds up living the present-day life of a pharma-tech executive (Terrence Howard) obsessed with avenging the murder of his wife (also Lefevre) and seeking solace in his own VR simulation… where he’s a guilt-ridden future cop.

Which is the fantasy, and which is reality? It’s an hour-long exploration of that scene in Total Recall where the Rekall doctor does his best to persuade Arnold Schwarzenegger that he’s trapped in an elaborate hallucination, but one that engages with the tragic subtext rather than the hero-fantasy appeal. Paquin’s terrific in her half of the story, and Moore’s script gives her a lot to work with.

Another episode, the as-yet-unscheduled K.O.A., gives The Last Man On Earth’s Mel Rodriguez a rare dramatic showcase as Philbert Noyce, an assembly-line worker who starts seeing and hearing increasingly hostile messages in the world around him. Is he paranoid, or just paying attention?

Writer/director Dee Rees (Mudbound) completely reworks the story The Hanging Stranger while still holding true to one of Dick’s favourite ideas: that the notion we’re only a step or two away from discovering that “reality” is just a gentleman’s agreement amongst maniacs… and our collective illusion might even be preferable to the ugly truth. It’s not a moral dilemma but an existential one, and Philbert wrestles mightily with it.

And maybe that’s the thing Electric Dreams gives me that Black Mirror doesn’t: I like a little compassion with my dystopian horror. It keeps things unpredictable. Charlie Brooker likes to watch the trap slam shut Philip K. Dick wants his characters to get away, even when they can’t. And the writers and directors of Electric Dreams are doing their best to honour that. Good for them.