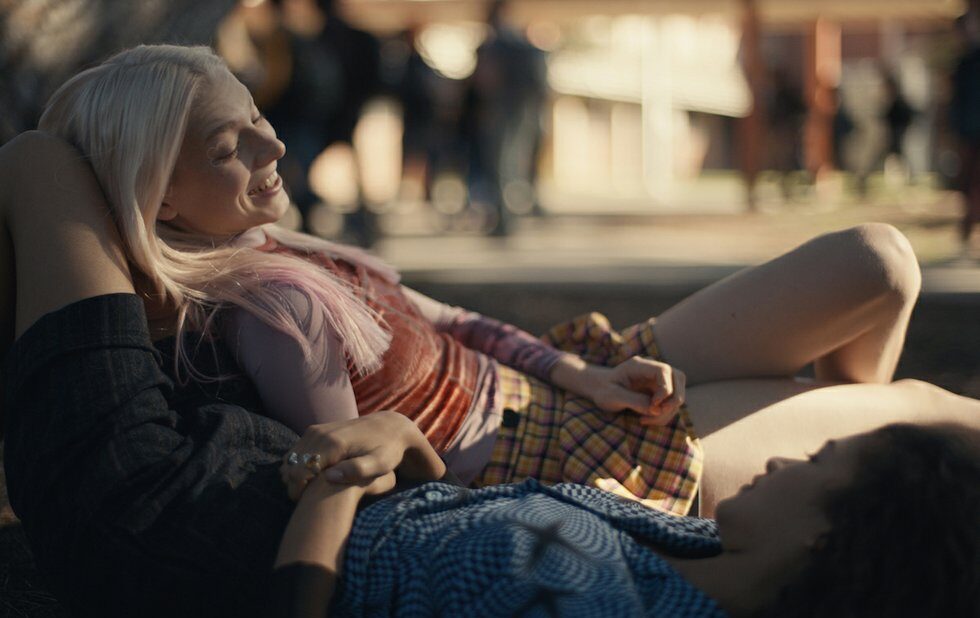 The world we’re leaving behind for the younger generation is a big topic in the news. Teenage climate change activists are leading civil disobedience actions in Europe, and teenagers have become the face of the anti-gun-violence movement in the United States.

These are not the teens you’ll meet in Assassination Nation director Sam Levinson’s eight-episode HBO series, Euphoria. A hyper-stylized teen soap about a group of middle-class suburban youth, it surveys the current moment through the eyes of Rue, a cynical and ambivalent 17-year-old recovering drug addict, played by former Disney kid Zendaya in a role that marks her crossover to adult material.

Euphoria creates a portrait of Generation Z addled by psychiatrists and prescription pills, unable to cope, encountering a pornofied online culture at ever turn and escaping into numbness. It’s like an online hot take became a TV show,  as showrunner Levinson essentially takes a bunch of search-engine key words – drugs, sex, identity, trauma – and puts them in a stylistic blender that cribs from Scorsese, Lynch, Verhoeven, Noé, Von Trier, the Wachowskis and more. Though his maximalist style is highly watchable and striking in the context of mainstream American TV, it also feels like a distraction from lazier elements, especially as Euphoria settles into the more conventionally melodramatic arc that episodic TV demands.

Each episode begins with a rapid-fire précis that shows the traumatic backstory for a different character. The pilot opens with Rue – who narrates the entire series – recounting the story of her against-all-odds emergence from the “cruel cervix of my mother, Leslie” three days after 9/11. As a kid, she develops anxiety and is put on meds. That evolves into swiping Xanax from her mom’s medicine cabinet, which leads to harder stuff like cocaine and fast-acting designer psychedelics.

Over the first four episodes sent to critics, Euphoria takes time developing each character’s baggage until their stories begin intersecting more dramatically in episode four, which is primarily set at a carnival.

Based on an Israeli series and the first major project to be executive-produced by Drake and his producing partner Future the Prince, the show is clearly designed to provoke but in familiar ways. The most obvious one is casting: Zendaya follows the well-worn path beaten by an army of once-kid-friendly actors – Selena Gomez, Elizabeth Berkeley and Lindsay Lohan, to name a few – who dove head-first into dark-n-edgy material in order to be taken seriously.

It’s hard to shake the notion that Euphoria is algorithmically contrived to cover as much of the zeitgeist as possible, though the opening montages at least acknowledge, if broadly, the systemic and intergenerational forces that inform the characters’ choices. But Levinson is more interested in sensational effects than complex causes.

The show’s extravagant style – heavy on moving camera, jagged angles and fast cutting – posits that Gen Z experiences anxiety, peer pressure, insecurity, etc. at warp speed. There’s an obvious influence of Martin Scorsese in the narration and various asides. Levinson has said his own experiences with drugs and rehab inspired the series, and the script is full of monologues on the effects of various substances that are more passionate and detailed than anything else. But his way of conveying their effects is less vivid: gelled lights, slo-mo and glitter tears.

There are less didactic moments. The action is largely shaped by the reactionary ways characters respond to insecurity, inadequacy and rejection. But often it slips into teen drama cliché: parents are either marginal or one-dimensional figures who pop up to finger wag or chug a glass of wine and turn a blind eye. Money is a non-issue since everyone is well-to-do, and a lot of the dialogue is more knowing than natural.

“I didn’t build this system, nor did I fuck it up,” she explains. “I’m just fucking exhausted.”

Nate’s backstory sets up a lot of promise around shame, repression anger and masculinity, but Elordi – at least over the first half of the series – is more of a one-note horror villain than fully fleshed out character. Zendaya and Schafer fare better. The show highlights how shame and discrimination against trans people forces Jules to meet men in potentially unsafe situations, and how that becomes a source of tension in her friendship with Rue. But, again, Levinson sidesteps the chance to delve into the topic.

Zendaya is convincing as the zonked-out Rue, always teetering on the cusp of self-awareness, her self-protective deadpan doesn’t begin to melt until the end of episode four. Perhaps her character will take on new dimensions in Euphoria’s latter half.

As Jules, Schafer is a mix of steely confidence and vulnerability. She falls into the category of LGBTQ TV characters stalked by the spectre of violence even her sweetest moments are mere set-ups for scarier ones. There’s even less lightness in Ferreira, Demie and Sweeney’s characters – their sexual experiences are unrelentingly sad and nihilistic. Whether Euphoria views female sexuality exclusively through a narrow, horror-show lens will depend on how the remainder of the series plays out, but it’s not looking promising. All of their story lines seem destined to land Euphoria on a listicle of the year’s top trauma porn.

The desire to go numb has been a prevalent and underexplored theme in mainstream culture for a while, particularly in pop music. But it’s not theme or exclusive to the younger generation. Euphoria is being positioned as an unflinching look at modern teen life, but its warmed-over, high-on-its-own-supply stylistic approach does more to distance the audience from the issues it purports to explore than to elucidate them. In other words, it succeeds as trashy exploitation.