FAHRENHEIT 451 (Ramin Bahrani). 101 minutes. Premiering on HBO Canada and streaming on HBO GO Saturday (May 19) at 8. 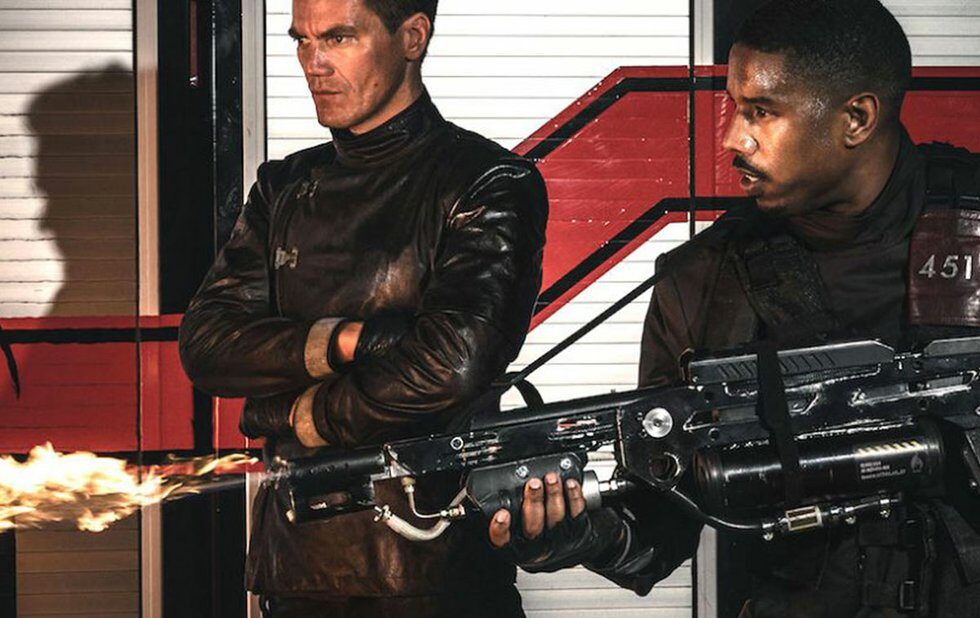 Michael Shannon (left) and Michael B. Jordan get fired up in updated Fahrenheit 451.

Now that weve reached the point where The Handmaids Tale is actively engaging with present-day anxieties, HBO Films is reaching back a little further into dystopian literature for a new adaptation of Ray Bradburys Fahrenheit 451.

Directed and co-written by Ramin Bahrani (Chop Shop, At Any Price), the film updates Bradburys dystopian masterwork about a totalitarian America intent on suppressing all revolutionary thought through the destruction of physical media for the age of proud ignorance, fake news and social-media bubbles.

For a while, its a pretty good fit certainly, its concept makes a lot of sense right now. (Im surprised this version of America doesnt have a Purge Night, but maybe its on the to-do list for next year.) And the core themes of Bradburys novel are as relevant as theyve ever been.

Bahranis adaptation, co-written with Amir Naderi, takes a number of liberties with the book, some of which work better than others and whenever a more wobbly notion comes along, Michael B. Jordan and Michael Shannon do a hell of a job selling it.

Jordan plays fireman Guy Montag, a jack-booted government book-burner who becomes a member of the resistance when he discovers the power of the written word through a contraband copy of Dostoevskys Notes From The Underground.

As Montags commanding officer, Shannon (who last worked with Bahranis on 99 Homes) is saddled with most of the exposition and a lot of fearsome pronouncements, but he adds a level of ambiguity to his character that makes everything he does that much more interesting.

Both Jordan and Shannon are solid, but the longer Fahrenheit 451 goes on, the more time we have to notice how small it feels, limited by both the budget and the scope of its imagination. Themes are raised then abandoned a subplot about Montag being a social-media star in this futures version of the internet is more of a passing thought thats never completely expressed.

And speaking of the net, the advent of the web means Bradburys concept of an illiterate society had to go, but it also confuses things further: in a world where texts exist digitally, burning physical books would surely be a symbolic gesture at best. Bahrani moves past that quickly, hoping we wont notice.

Hes never been great with endings, either, and trades the novels Pyrrhic victory for a smaller, more personal triumph that doesnt fully land.

This version of Fahrenheit 451 goes out with a fizzle instead of a bang, but in all fairness I cant hang that entirely on its director Francois Truffaut couldnt quite make it work in 1966, either.