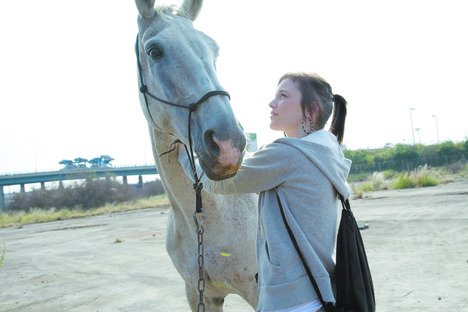 Lets not horse around. Katie Jarvis is a terrific discovery.

That film immerses us in a Glasgow of sickly sodium lamps and video monitors – the world that traps Kate Dickie’s CCTV operator in a morass of feverish obsession and misdirected sexuality.

Arnold’s new drama, Fish Tank, creates a thoroughly different but equally convincing universe in an Essex housing estate, where 15-year-old Mia (Katie Jarvis) spends her days fighting with her mother (Kierston Wareing) and snapping at her younger sister (Rebecca Griffiths). Sometimes she sneaks off to an unused apartment where she throws back cider and works on a dance routine. There’s nothing else in her life, but there’s nothing in anyone else’s life either.

Then Mia’s mother brings home a new boyfriend, Connor. He’s a charmer, this one – even-tempered, nice to look at, good with the girls. He’s played by Michael Fassbender with the same mercurial quality he brought to his stuffed-shirt role in Quentin Tarantino’s Inglourious Basterds and a hint of the magnetism he showed in Steve McQueen’s Hunger.

When Connor’s around, Mia feels different. There’s definitely something going on. Something complex and powerful.

Arnold isn’t interested in reinventing the coming-of-age story she’s more intent on exploring what drives people to make the choices they do.

Arnold acknowledges her inspirations – Mike Leigh and Ken Loach – by shooting in the old-school 4:3 aspect ratio of the British television features she watched growing up. And like Leigh and Loach, who discovered Gary Oldman and Tim Roth, Arnold makes a find of her own in Jarvis, who’s riveting. You won’t soon forget her – or Mia. They’re indelible.