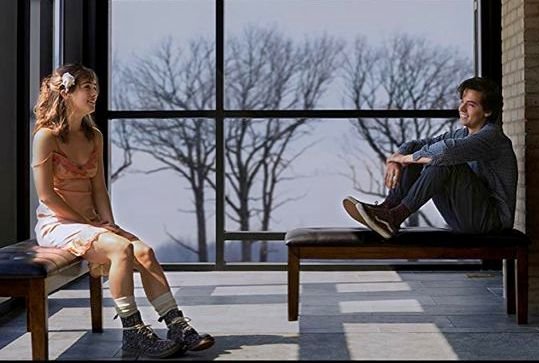 Five Feet Apart is a cliché teenage love story, but thankfully it doesn’t romanticize living with a life-threatening disease.

It follows 17-year-olds Stella (Haley Lu Richardson) and Will (Cole Sprouse), as they fall in love despite not being able to be physically close to each other. They both have cystic fibrosis and need to maintain a distance of six feet apart so that their condition doesn’t worsen. They’re an unlikely duo – he’s rebellious and doesn’t care to follow his treatment, while she’s meticulously organized. As their feelings intensify, they’re tempted to risk their lives and give in to their attraction.

Sprouse doesn’t stray far from his Jughead character on Riverdale – he’s creative, brooding and quickly falls for the naive girl. But he’s good at it. He portrays Will in a believable and genuine fashion, and quite literally, is infectiously charming in his role.

Sneaking around a hospital and falling in love despite all odds in rom-coms isn’t a revolutionary story line. But just like It’s Kind Of A Funny Story, Five Feet Apart excels at eliminating the generic tropes associated with the subject.

Richardson makes Stella real, raw and ugly. It helps that Stella has a developed backstory that Richardson uses to access the sorrow layered behind her optimism.

Even the text bubbles that pop on screen when the two are texting aren’t overly cheesy – something very few filmmakers can successfully achieve.

Sprouse and Richardson are strong representations of teenagers losing themselves in love, believable enough for the audience to remain interested through the somewhat slow beginning of the film.

Moises Arias, best known as Rico in Hannah Montana, deserves mention as Poe, Stella’s best friend. He’s better in the serious scenes than in the contrived gags that seem forced into the script.

Yes, Five Feet Apart is a cliché teenage love story, but Baldoni reminds us why we love them so much.