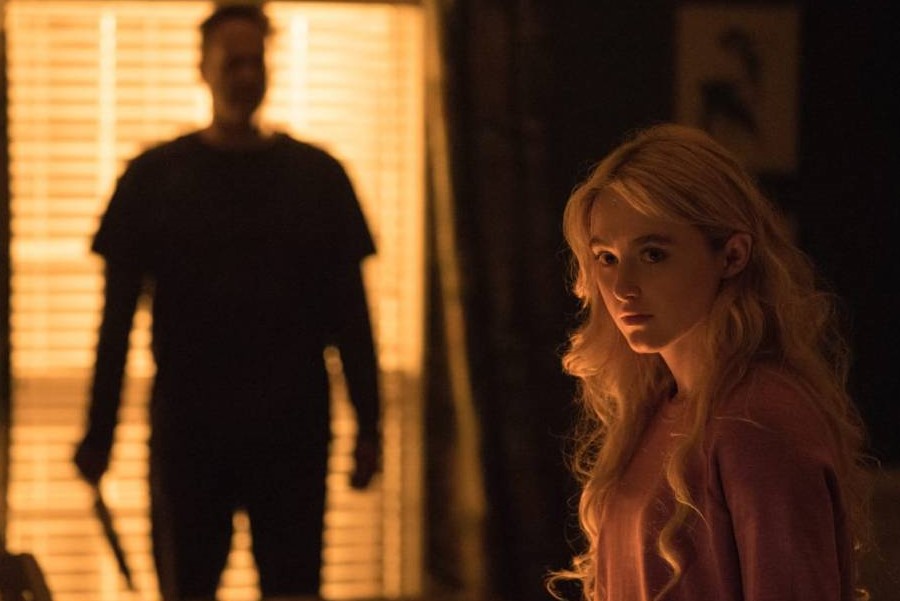 Vince Vaughn is Kathryn Newton, and vice-versa, in Freaky.

The thing to keep in mind about Blumhouse’s Freaky is that it isn’t really a horror movie. Like Happy Death Day and Happy Death Day 2U – which, as it happens, were also directed by Christopher Landon – it’s a crafty little mash-up, infusing another kind of story with instantly recognizable horror tropes, and seeing what the two genres can do together.

The first Happy Death Day memorably spliced the existential time-loop comedy of Groundhog Day into the DNA of a standard slasher movie. The sequel went even further away from horror and into an inspired riff on Back To The Future Part II. Neither picture is especially scary, but they’re really entertaining, rooted in a clear love for the slasher genre and driven by a fantastic performance by Jessica Rothe as their unlikely hero.

Freaky similarly keeps the slasher love – as well as the retro affectation for the 80s movies that perfected the genre – but pivots away from quantum physics to a good old-fashioned body swap movie, with a high-school senior (Kathryn Newton) switching souls with the hulking serial killer (Vince Vaughn) who’s been brutally dispatching teenage sex-havers in her small town.

Yep, it’s Freaky Friday The 13th, a title Landon and co-writer Michael Kennedy would clearly have loved to use, except for the whole copyright thing.

They come as close as possible to putting Newton’s poor Millie in the body of Jason Voorhees, though – a silent, violent killer whose face mask bears a few structural similarities to a goalie’s. He’s known as the Blissfield Butcher, and his unfortunate reliance on an Aztec sacrificial dagger when attacking Millie enables the switch, which comes with a 24-hour window of opportunity to break the spell.

But first Millie has to convince her friends (Misha Osherovich, Celese O’Connor) that she’s steering the body of the middle-aged murderer who seems to be stalking them at their high school. And then, of course, there’s the inconvenient fact that the Butcher is wandering those very same halls, wearing the body of a five-foot-five teenage girl.

Freaky doesn’t shy away from the incongruity of its mixture, and both Newton (who starred in the Landon-scripted Paranormal Activity 4 long before breaking out in Big Little Lies) and Vaughn (whose recent bulking up for movies like Brawl In Cell Block 99 and Dragged Across Concrete gives him an imposing screen presence that’s immediately turned on its head by the concept) have a great deal of fun playing the inverted versions of their characters. Landon establishes a few key personality traits for both leads early on, and lets his actors go to town: Millie has a nervous habit of chewing her fingernails, which Vaughn uses sparingly but effectively, while the Butcher’s tactical physicality and unflinching stare looks a lot like confidence when Newton uses it.

The script borrows a lot from Happy Death Day, both in its self-aware attitude and the emotional evolution of its lead, who’s forced by the impossible circumstance to step outside herself – literally – and come to terms with a recent tragedy. So there’s a familiarity to Freaky that works against the novelty of its mash-up, and also blunts the horror aspects even further by having them used for comic payoffs. (That said, Tony Gardner’s practical effects provide another zing of nostalgic pleasure for those of us who grew up on what Roger Ebert grumpily termed dead-teenager movies.)

So no, if you’re looking for a real horror movie, Freaky isn’t that. But if you’re interested in watching some very clever people work through a very silly spin on a certain kind of horror movie… well, this is absolutely that. Go to town.