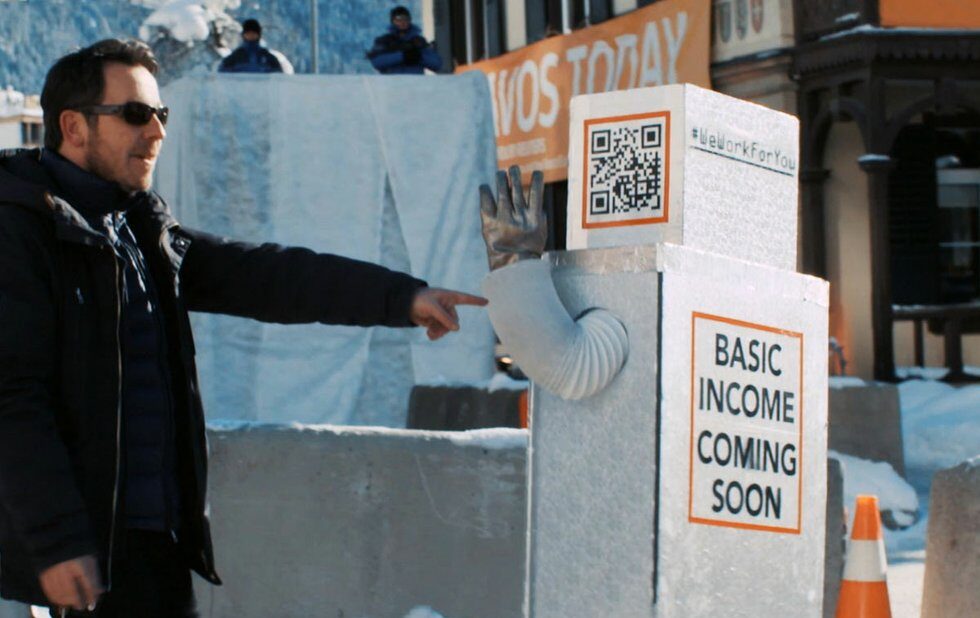 What a post-capitalist world might look like is coming into clearer view. Libertarian Silicon Valley types keen on automating labour are promoting the idea of an unconditional basic income to make up for job losses, finding common ground with anti-poverty activists on the left.

But long before Elon Musk was touting basic income, there was Captain Jean-Luc Picard of the U.S.S. Enterprise. Austrian filmmaker Christian Tod bookends his documentary on basic income with clips from a 1988 episode of Star Trek: The Next Generation in which the captain informs time-travelling 20th-century financier Ralph Offenhouse that, 300 years on, “people are no longer obsessed with the accumulation of things.”

“It has never been about possessions,” Offenhouse replies. “It’s about power.”

Free Lunch Society opens with a god-like view of earth and includes  many aerial shots of continents and landscapes. Ultimately Tod argues that for basic income to succeed, the challenge is not making the moral or even practical case for decoupling work from income, but convincing the higher ups to relinquish a certain level of power.

Tod speaks with economists and entrepreneurs, provides historical context on failed basic income experiments in North America in the 70s  and points on classist blind spots on both sides of the political spectrum. In one of the most interesting archival sequences, we see how the idea of “negative income tax” once gained traction among right wingers like Milton Friedman, Richard Nixon and Donald Rumsfeld. (It was also pushed by Martin Luther King, Jr.)

We also see contemporary examples in Switzerland and Namibia (Ontario’s current basic income pilot project is not mentioned), but research into impacts is hard to come by. So Tod looks at antecedents such as Alaska’s annual oil wealth payouts and lottery winners to suggest guaranteed income does not deter people from working, but rather emboldens them to follow entrepreneurial dreams. The film also shows how such schemes could be financed and implemented.

It amounts to a thorough and engaging look at the topic, but the film grows tediously formulaic in its last half hour.

Like most social issue docs, Free Lunch Society is as straightforward a talking-head film as they come, right down to the detached, ambiguously Euro narrator who sounds like she could be one of our future robot overlords.