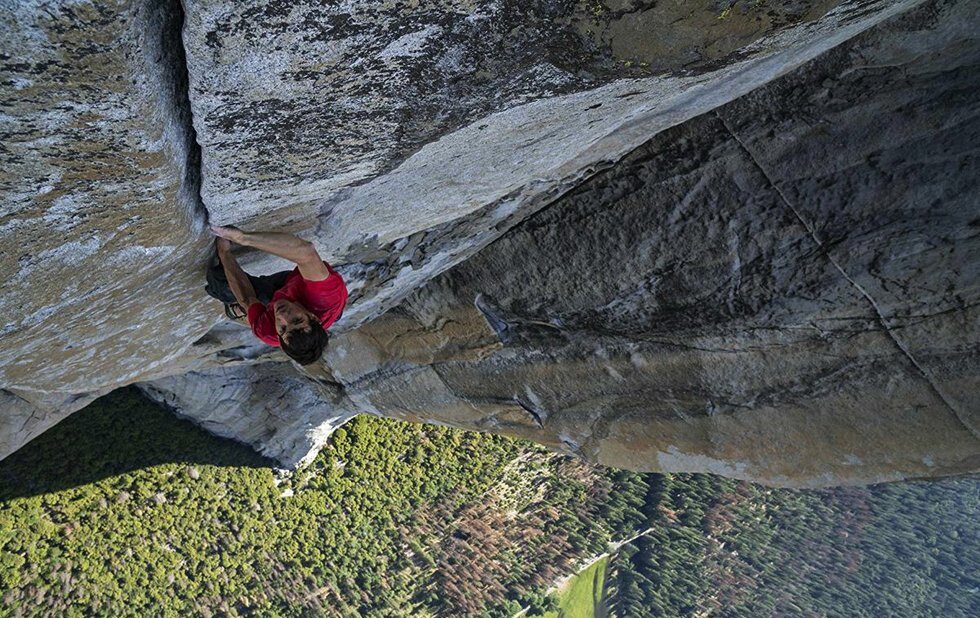 Keep in mind that the term “free solo” means no ropes, harnesses or equipment. If you lose that grip or toehold, you’ll die, usually alone. (Most free soloists climb by themselves.)

Filmmakers Elizabeth Chai Vasarhelyi and Jimmy Chin know the ropes about filming at extreme heights their doc Meru looked at Chin and his climbing friends’ attempt to scale the Shark’s Fin peak in the Himalayas.

From Free Solo’s vertigo-inducing opening shot, to practice runs and the nail-biting climb itself, the film, produced by National Geographic, is suitably awe-inspiring.

Because Chin and the crew are both friends of Honnold and experienced climbers, they capture some thrilling angles. But this fact adds another layer of complexity. What if their subject doesn’t make it? And what if something the crew does – drop a camera, take a fall – affects his goal?

The movie’s main drawback is Honnold, who’s not very insightful about himself or why he climbs. A loner who lives in his van, doesn’t know how to make coffee and admits that he would “always choose climbing over a lady,” he’s not the most sympathetic subject.

Part of the film’s tension comes from the appearance of Sanni McCandless, who slipped her phone number to Honnold at a book signing and, once they begin dating, starts disrupting his concentration. One of Alex’s climbing peers points out that he hadn’t fallen before, and, after meeting Sanni, has two major falls.

The filmmakers do their best with their emotionless subject, going so far as to be there during and after an MRI where scientists study his non-reaction to fear. The film also suggests that some of Honnold’s affectlessness may come from his family.

Given the fact that Honnold, McCandless and the filmmakers were all present for the film’s TIFF premiere, you know he didn’t die – and presumably things worked out between the couple.

But that won’t stop you from shouting at the screen during some of the high-stakes climbing scenes.