NOW MagazineMovies & TVReviewsGame Of Thrones finale: a lackluster end to a cultural phenomenon

Game Of Thrones finale: a lackluster end to a cultural phenomenon 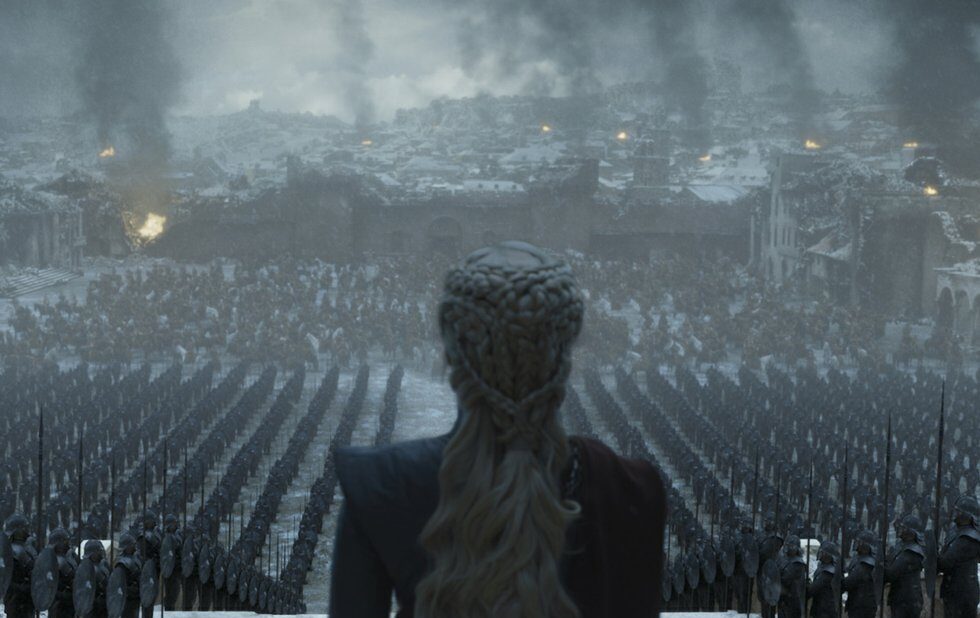 As Jon Snow (Kit Harington) trotted alongside Tormund (Kristofer Hivju) and the Freefolk north of the wall, the theme music thundering one last time in the background, the screen fading to black, I turned to my partner: “Is that really it?”

After eight years of countless battles and throat slitting, war room scheming and blood magic, talks of The Prince Who Was Promised and other vague prophecies, Game Of Thrones is over. And it doesn’t feel nearly as satisfying as it should have.

The shortened final season was always going to be challenge for a TV series that at its grandest, successfully weaved together a complex web of stories and characters across continents, and continually jolted viewers with shocking deaths and coups. But who could have predicted it would rush through the last episode so quickly and brutally?

The first third of the finale, titled The Iron Throne, magnificently illustrates the savage aftermath of war, burnt corpses piled high in the streets and ash from scorched buildings falling from the sky like snow. The scene of Daenerys (Emilia Clarke), flanked by the Targaryen family banner slung over a crumbling wall and the CGI-budget busting Drogon, praising her surprisingly robust army as liberators and freedom fighters looked like it could have been taken from a history book of any tyrannical leader addressing their troops.

But then Jon stabs Daenerys in the heart as they embrace and Drogon torches the Iron Throne in the most symbolic moment of the finale, and it’s as if writers and directors David Benioff and D.B. Weiss didn’t know where to go next. (For the record, unlike a lot of fans, I thought Dany’s descent into madness had been brewing for seasons, but her swift killing was a huge disservice to the character. Even Lena Headey’s Cersei and Nikolaj Coster-Waldau’s Jaime, who died in each other’s arms, got a more emotional death scene.)

It seems plain lazy we don’t see what happens when everyone discovers that Jon murdered Dany. Did Jon just fess up? Was he caught trying to escape to the north? Presumably, a big blowup would’ve ensued between the Northerners, still deeply devoted to the King of the North, and the Unsullied and Dothraki.

Instead, we merely get a flash forward to Tyrion (Peter Dinklage) in shackles, the only way knowing that time has passed by the grunginess his beard. In what feels like fan service – which I admit I’m here for – the last remaining characters Sansa (Sophie Turner), Arya (Maisie Williams) and Bran (Isaac Hempstead Wright), Yara Greyjoy (Gemma Whelan), Brienne of Tarth (Gwendoline Christie), Sam (John Bradley), Davos (Liam Cunningham), some new prince of Dorne and the former breast-milking slurping Robin Arryn (Lino Facioli) gather for a tribunal to decide a) who should be next king b) what’s to be done about the treasonous Tyrion and queenslayer, Jon Snow.

Tyrion’s long monologue about the importance of stories as being more powerful than armies, coin and love was touching, but his final assertion that it’s Bran Stark who has the most compelling story and therefore should be king, was ludicrous. What about Sansa, who has proven to be an excellent leader and military strategist despite getting married off to vicious husbands again and again? Or Arya, who literally killed the Night King and saved the whole world?

As the Three Eyed Raven, Bran can see the past, present and future, and in that sense, he does make a fitting king who can hopefully break the cycle of tyrannical rule. But for the past few seasons, Bran has been a purposefully obtuse, emotionally-stunted character (who didn’t even warg into a dragon!) so there’s little emotional payoff of him becoming king.

The episode then goes on to tie up remaining loose ends: Bran makes Tyrion his hand, Sansa becomes queen of the once-again independent North, Arya sails off into infinity to discover what’s west of Westeros despite never revealing a desire for colonization, and Jon is banished to the Night’s Watch, where at the very least, he gets to give good boy Ghost a pat on the head.

Ahead of the final season, Benioff and Weiss had the seemingly impossible task of wrapping up an expansive world in a way that was still rife with surprise and drama, while also satisfying a nit-picky fan base so fervent, it launched a petition with more than a million signatures calling for a re-do of the final season.

All in all, season 8 wasn’t the trash fire some vocal fans have made it out to be. Episode 3, The Long Night (aka The Battle of Winterfell) was a masterpiece in cinematography and captured the confusion and mess of the battlefield. And the penultimate episode, The Bells, will forever be immortalized alongside the great Game Of Thrones’ episodes like the Red Wedding, Hardhome and the Battle Of The Bastards for it sheer scale and gravitas.

A few more episodes could have resolved some of the issues plaguing this season, like Dany’s descent in madness, the quick slaughter of the white walker army, or the anointing of a new king.

But then again, any conclusion might have felt rushed or incomplete. Game Of Thrones became a cultural phenomenon, set a new precedent for TV productions and enraptured a massive cross-section of loyal viewers. As Tyrion asserts, the most powerful thing in the world is a good story, so who would want that to end?