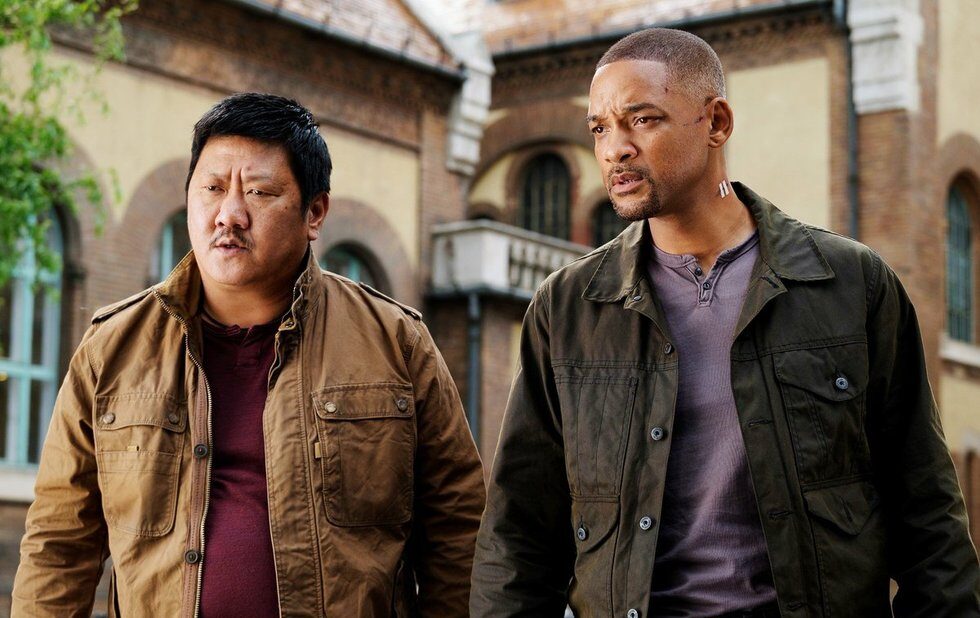 Ang Lee introduced my preview screening of his new movie Gemini Man, and I kind of wish he hadn’t.

The two-time Oscar winner – who gave us intimate character pieces (The Wedding Banquet, Eat Drink Man Woman, The Ice Storm, Brokeback Mountain, that exquisite 1995 adaptation of Sense And Sensibility) and thrilling, sumptuous genre works (Ride With The Devil, Crouching Tiger, Hidden Dragon) before plunging into the elaborate digital fantasias of Life Of Pi and Billy Lynn’s Long Halftime Walk – spent a few minutes telling us about the movie he thought he’d made.

Gemini Man, Lee said, is an action film that aims to recapture the slam-bam chase pictures of the 90s while also interrogating the concepts of age and responsibility, all filtered through the spectacle of watching Will Smith battle a younger, digitally created version of himself.

It sounded great. And then they showed us the movie, and it is… not that.

Gemini Man is a mess of thin characters, bad CG and ugly imagery, with gifted actors doing their best to sell the hoariest of action-movie clichés and match the eyelines of a defective digital character. It simply does not work.

Let’s deal with the human story first. Gemini Man’s hero (and Smith’s principal role) is Henry Brogan, a veteran government hit man who, at 51, is ready to retire from the Defense Intelligence Agency. Something about his last kill felt hinky, and the moment his suspicions are confirmed, both Henry and his DIA minder (Mary Elizabeth Winstead) are marked for death by both the Agency and nefarious paramilitary contractor Clay Verris (Clive Owen), who dispatches Junior to whack them after the DIA’s own hit squad fails. Also, Benedict Wong turns up as an old war buddy of Smith’s, providing the comic relief and charm this movie desperately needs.

Where did Junior come from? Science, and a lot of hand-waving. Gemini Man’s script has been around since the 90s, which explains both its clunky exposition and its limited action scope take out the clone stuff and its three major set pieces would have slotted right into something like Eraser or The Specialist. The globe-trotting narrative, which zips from Belgium to the U.S. to Colombia to Hungary and back to America again, also feels like it was conceived in a time when nobody cared too much about flight plans or passports or any of the stuff Jason Bourne takes so seriously these days.

Really, though, Junior comes from the same place as Life Of Pi’s digital tiger: a score of visual-effects artists and Lee’s conviction that there’s nothing CGI cannot accomplish. He’s become even more of a digital zealot than Robert Zemeckis, throwing pixels at every problem when a physical solution would be both simpler and cheaper. And while that strategy can work wonders in the right context – Life Of Pi has moments of stunning artificial beauty – in Gemini Man we are plunged straight into the uncanny valley.

In his introduction, Lee said he intended Junior to be fully digital, with Smith performing the role entirely in motion capture it looks like they ultimately settled for a mixture of digital de-aging and body doubling, and it’s an uphill battle in every shot. We know what Will Smith looked like in his twenties, and it wasn’t this waxy, glassy-eyed thing. The effect is unconvincing in darker scenes, but it’s actually worse in daylight: there are moments when the character’s head seems to be floating on his photo double’s neck, and at one point it’s like you’re watching Smith’s eyes, nose and mouth argue with each other about where they belong on his face.

Lee’s beloved high-frame-rate digital cinematography makes everything worse: the process has been refined in the years since Billy Lynn’s Long Halftime Walk, but it still flattens out the image and collapses the texture of lighting. Cars, trains and airplanes look like models clothes look like costumes, locations like sets. Close-ups of faces look eerily sharp, even when the actors haven’t been replaced by their digital simulacra.

Action scenes with quick camera movements have the blur of an HDTV in demo mode, and that’s before you factor in what it does to Junior, who in fight scenes has a jerky, weightless movement that made me think of the early Spider-Man movies. It’s unreal in a constantly distracting way.

I can picture Lee convincing his colleagues it would work when everything was put together, and of course they’d put their faith in him – he’s pulled it off before. I can also tell you he absolutely believes he’s made a good movie. But he has not.

It hurt me to watch Gemini Man, and I mean that literally: I’m typing this through a splitting headache.