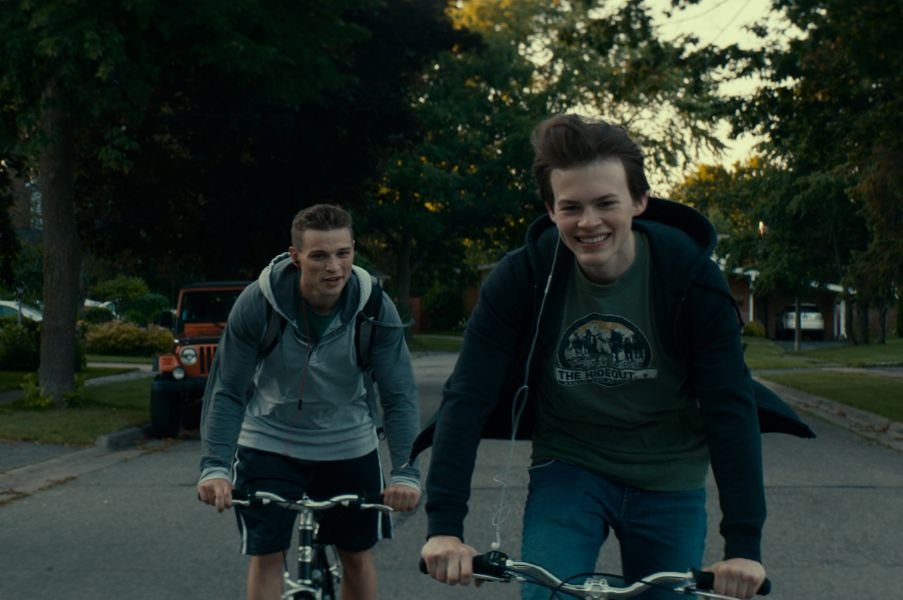 “Pay attention – this is all going to happen very quickly,” says a high school science teacher to students just about to complete a chemistry experiment.

It’s a small, early line in Giant Little Ones, but it’s full of symbolic meaning, especially for Franky (Josh Wiggins), a fresh-faced teen who will soon find himself reacting to another kind of experiment – this time a sexual one – that alters his life.

Keith Behrman’s sophomore feature – one of TIFF’s Canada’s Top 10 titles – is a modest, beautifully shot coming-of-ager about a kid who isn’t ready to define himself yet, at least sexually.

The well-adjusted Franky lives with his hot single mom (his words), Carly (Maria Bello), and sister, Deanne (Olivia Scriven), in a wealthy, unnamed suburb. Franky and his lifelong bestie, Ballas (Darren Mann), are both stars on the school swim team, and they’re involved in relationships with pretty, popular girls. But when something happens between them on the night of Franky’s booze-filled 17th birthday party, a rift opens up in their friendship.

Franky wants to talk about it, but Ballas shuts him out. And soon a rumour spreads that Franky’s gay.

This is complicated by the fact that Franky has never accepted his dad, Ray’s (Kyle MacLachlan), coming out late in life.

Writer/director Behrman delivers a first act that’s positively writhing with excitement and pulsating with hormonal energy. He’s got a great eye for capturing beauty in a suburban sky or the sparkling water in a swimming pool.

But the film’s tone – manipulated by an ever-present score – shifts uneasily between earnest after-school special and dark, knowing comedy. There are also big gaps in the script. And Franky’s quirky friendship with Mouse (a confident Niamh Wilson), an out-and-proud lesbian student, seems like a contrived device to make Franky seem open-minded.

Wiggins, rightly anointed one of TIFF’s rising stars when the film debuted at the festival last year, radiates charisma, and he has a lovely, believable rapport with Mann, Bello and Taylor Hickson as Ballas’s enigmatic, rebellious older sister.

And MacLachlan delivers an understated, moving performance as an adult carefully trying to connect with his distant son.

Despite the holes in the script, and an ending that doesn’t quite feel earned, the film offers up a fresh look at the complex issue of teen sexuality. There are no easy answers, but there are plenty of questions, and things are going to change very, very quickly.