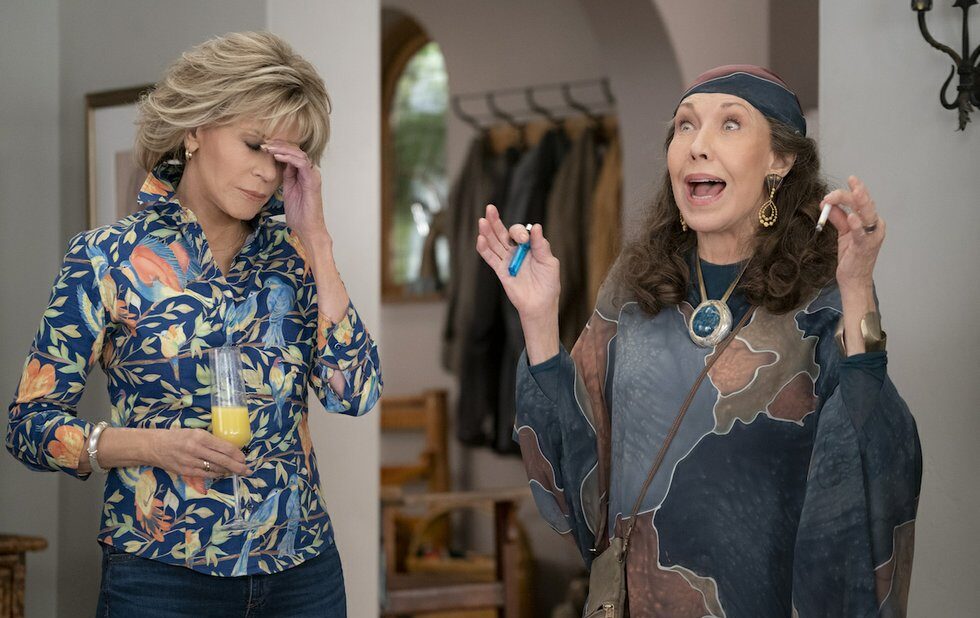 In the sixth – and penultimate – season of Grace And Frankie everything is about to change. Again.

The show opens where we left off: on the beach. Grace (Jane Fonda) tells Frankie (Lily Tomlin) that she has, in fact, married her billionaire boyfriend Nick Skolka (the unreasonably handsome Peter Gallagher).

The comedy series has always been about how to deal with change. Even in your twilight years, change comes for you hard and fast. The first season gave us two underrepresented 70-something women faced with a life-altering reality, but by season six, change is not always so colossal. (Grace marrying Nick is as close as it gets.) Now, the show thrives when it’s showing us the ways interpersonal relationships shift through transformation – and how honesty can be both a character benefit and flaw.

But this season, evolution is heavy-handed rather than organic, and the series rushes through some of the most important moments, leaving some characters behind.

Grace sheepishly looks at Frankie for approval of her spontaneous act – not just in episode one but throughout the season. Though it’s certainly aspirational to be married to Nick’s supreme eyebrows and melty smile, Grace is unsure about being the “new wife” in a sea of new (trophy) wives much younger than her who want to sell dog candy on Instagram. (A real plot point!)

A point of tension for Nick is how much time Grace spends with Frankie, which is good because it helps move the plot. But the new dynamic created by the marriage sticks more than it did when Nick was simply Grace’s boyfriend. The writers rely on the familiar trope of Nick demanding more of Grace’s presence now that she is his wife, making his character clingy. It’s important to establish a new layer to their relationship but this subplot feels half-hearted. A better plot point: Mary Steenburgen’s role as Nick’s ex-wife Miriam, whom Grace had no idea about, is stupendous.

But Grace, with Frankie’s help, dives into work, feeding a renewed entrepreneurial spirit that takes them both to new heights: inventing a toilet that rises. They dubbed the creation the Rise Up or, as Frankie calls it, the “Helen Mirren of plumbing fixtures.” This is the only bathroom humour I enjoy.

The Rise Up lands the pair on Shark Tank but not without a few missteps. (I don’t want to expend many words on him but the worst part of this season is Kevin O’Leary’s cameo for the sake of this Shark Tank moment. So, I’m going to move right along.)

Parts of the season feel rushed, usually the subplots involving Grace and Frankie’s now-married ex-husbands Sol (Sam Waterston) and Robert (Martin Sheen) or Grace’s daughters Brianna (June Diane Raphael) and Mallory (Brooklyn Decker). Frankie’s son Bud (Baron Vaughn) gets the short-end of the stick, even though his dynamic with his wife Alison (Lindsey Kraft) has always been entertaining. His brother Coyote (Ethan Embry) finally getting it together and sorting out his relationship foibles is touching but still feels brief. Frankie is happily ensconced with a new beau, too, but that plot line is also a little flimsy.

Sol’s (spoiler!) prostate cancer diagnosis feels like a blip on the radar. When Robert went through a similar health crisis in seasons one and two, we could feel the weight of that and how, even in the midst of the illness, both Frankie and Grace centred their own needs in order to move forward. Sol’s health concern is, by comparison, inconsequential.

Grace And Frankie has always balanced levity with solemnity and that happens most effectively in a tender scene between Frankie and Robert. It only happens once this season, with a delightful and potentially blasphemous tête-à-tête involving a confessional, but I was left wanting more.

Fonda and Tomlin are still reigning TV queens, and their chemistry is undeniable. Their easy rapport gives the show a solid foundation even when the writing and pop culture references are all over the place. Grace calls Frankie her “emotional support witch” – and I would nod furiously in agreement.

It’s still really good and perhaps I’m a little tough on this season because I know the show is nearing its end. Of course it is: Fonda and her co-stars are getting arrested at weekly climate change protests, even while filming the show.

In the season finale, there is an event that’s both positive and negative for Grace and Frankie, signalling yet another transformative movement in the plot. Yes, change is coming once again for our comedic duo. Complex TV relationships and characters tend to max out by age 50, which is why, despite the show’s flaws, I could watch Grace and Frankie’s existential journeys over and over again.