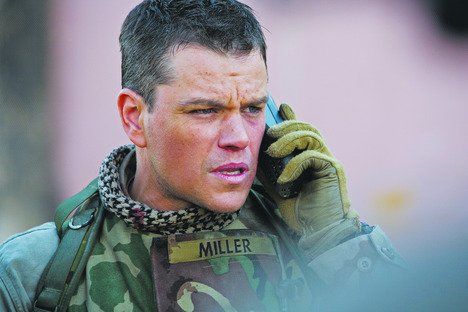 It isn’t The Bourne Trilogy, but it’s the next best thing. Star Matt Damon reprises his tight, polite military tough guy and director Paul Greengrass pursues his fast, fragmented, pseudo-realistic approach to action and dialogue. The result is an entertaining, forgettable time-waster.[rssbreak]

In a newly fallen Baghdad, chief warrant officer Roy Miller keeps coming up empty-handed when he’s sent to secure caches of the dreaded weapons of mass destruction. He suspects he’s getting bad intelligence, but the higher-ups don’t want to know. A chance encounter sets him in pursuit of Al Rawi, a former Saddam general who may have the answer. Gunfire and explosions ensue.

The big differences between Jason Bourne and Miller (apart from the amnesia), is that Miller has nothing personal at stake and isn’t even in peril until the climax. Miller is more plot device than hero. He’s there to bring out the story’s one big idea: that the WMD might have been a U.S. intelligence community fake-job. That might have been shocking in 2004. Today, it’s a given.

Greengrass works his shock cuts, fragmented images and constantly hustling camera even in the movie’s quieter moments. The techniques generate the requisite excitement when he can keep the narrative flow coherent, but too often the action disappears into abstract flashes of color and motion that signify nothing.