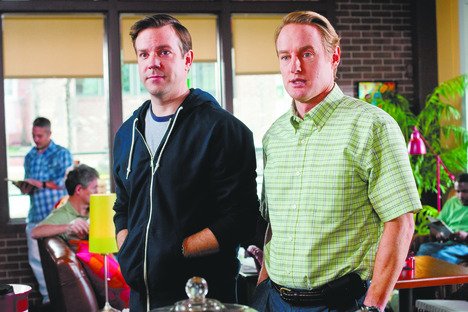 The Farrelly brothers, the makers of Dumb & Dumber and There’s Something About Mary, attempt to reclaim the territory they ceded to Judd Apatow in the last decade with a midlife-crisis comedy about two dorky Providence men (Owen Wilson, Jason Sudeikis) given a week off from their marriages by their wives (Jenna Fischer, Christina Applegate).

While their characters may have aged, the Farrellys haven’t grown up themselves. They’re still casting their non-actor pals in supporting roles and paying absolutely no attention to setting up shots, pacing scenes or even building momentum from one set piece to the next.

Wilson and Sudeikis’s characters come across as venal idiots rather than the frustrated souls they need to be for the jokes to work, and the gross-out gags are so blatantly out of place that you have to wonder why they’re even here – apart from the fact that the Farrellys just don’t know any other way to make movies.