Review: Alex Ross Perry’s Her Smell is full of ugliness and empathy 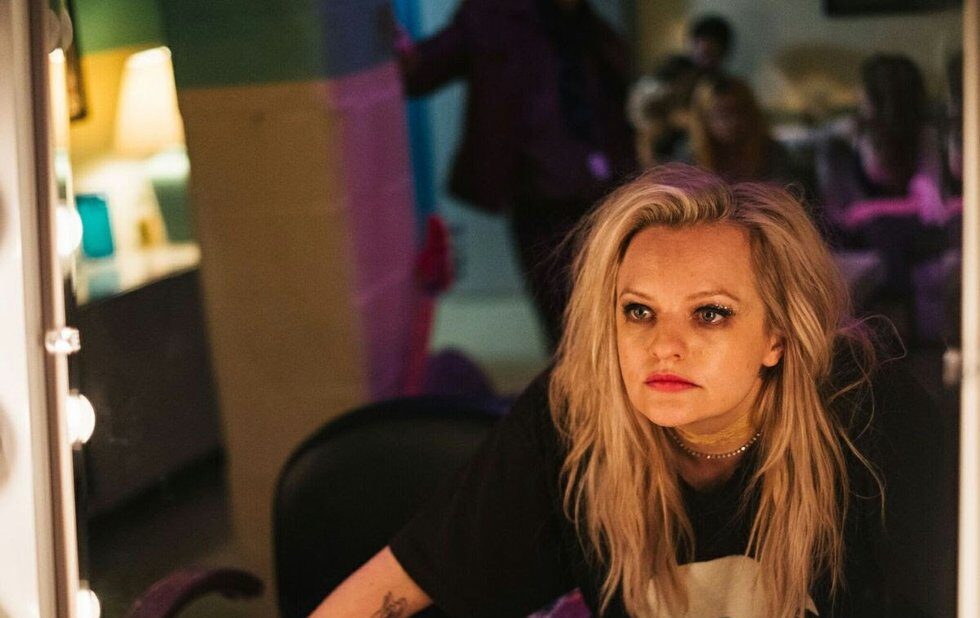 Our culture derides, fetishizes and capitalizes on out-of-control celebrities, but Alex Ross Perry challenges the audience to endure trainwreck behaviour from the point of view of the inner circle – and ponder what might be behind it.

Elisabeth Moss stars as Becky Something, a fading 90s grunge singer whose total self-absorption has downgraded her once-bestselling trio from arena to club status. She is a hurricane of cruelty, blood and vomit who creates such a perpetual state of tension that her absence is as deeply felt as her presence.

When we meet Becky, she is coming off stage from a club gig with her trio, Something She. Her fed-up ex Danny (Dan Stevens) shows up with an infant daughter that Becky barely sees and tries to speak with her as she runs around the dressing room gesturing and pontificating dramatically, clearly inebriated. Adding to the chaos is theatrically dressed shaman Y-ema (Eka Darville) whose job is essentially to pop up and act as buffer when Becky needs to dodge a real conversation or emotion.

Meanwhile, her manager Howard (Eric Stoltz) fosters a sit-down with rising, St. Vincent-like pop/rock musician Zelda (Amber Heard) in the hopes Becky will agree to be her opening act and give the group a much-needed cash injection so they book studio time (that they can’t really afford) to finish an album (that they can’t seem to finish).

“I heard on your last record you didn’t have any guitars,” Becky sneers at Zelda, whose face reflects back a mix of suppressed irritation and pity. She clearly isn’t buying the sanctimonious purist rhetoric – no one is. Becky takes the offer as a personal affront to her stardom and mercilessly lays into Zelda even further. She, like Howard and Becky’s weary band mates Marielle (Agyness Deyn) and Ali (Gayle Rankin), regard this invective with annoyed shrugs and bitter remarks. Ali has quit or been fired multiple times and Marielle is a low-key addict who understands Becky’s excesses as much as she abhors them.

Perry structures the film over five acts each limited to a single location. The first three chronicle Becky’s increasing slide toward rock bottom, with DP Sean Price Williams filming (on 35 mm) her tirades at uncomfortably close-range, as if the camera is in the middle of its own tantrum. The effect is made more disorienting by a composer Keegan DeWitt’s soundtrack of low-level noise that creates a mood unfulfilled urgency.

The single locations also make Her Smell feel stage-y at times, like filmed theatre, especially in the second act, which is set in a recording studio where Becky meets a younger, more successful trio of acolytes The Aker Girls (Cara Delevingne, Ashley Benson and Dylan Gelula). Despite the the younger actors’ bratty styling, their performances are largely visual and full of opportune and slyly funny glances and reaction shots. The over-the-top literary flourish in Becky’s diatribes – and Perry’s script – are balanced by everyone else’s sublimated emotions.

The theatricality also works because it’s part of Becky’s character. The third act essentially contains the film’s explosive climax, as she keeps an audience waiting for an inordinate amount of time while whipping up chaos for a documentary crew that’s now following her. The crowd is waiting but the performance is well underway, and Perry and DeWitt ratchet up the tension with sound design that feels like white noise. “You gonna stay for the show?” Howard asks Becky’s mother Ania (Virginia Madsen). “No, I don’t want to see what happens next.”

The twist is there are two more acts, which see Becky going into contemplative mode in a jarring tonal shift. This part of the film, set years later, is where Moss truly shines as Becky examines her toxic persona with a new level of self-awareness – it’s like she is another person. Moss also strikes a subtle balance in the musical scenes, charismatically rising to the occasion one minute and sounding like dreck the next.

Deyn is equally good as the long-suffering foil for Moss’s insanity. It’s easy to watch a celeb meltdown from afar, but what if you your own sense of self and livelihood is dependent on that person? Interstitial home movie sequences suggest Something She’s financial success, but by containing the action and sharpening the focus on intimate personal dynamics, Perry suggests much about the impact of capitalism on artistry that is born of pain and the perversion of punk idealism. It builds toward a moment of catharsis that is not exactly the kind of crowd-pleasing catharsis audiences like.

Like a lot of the best songwriting, Her Smell is frequently ugly but it’s also intensely empathetic.