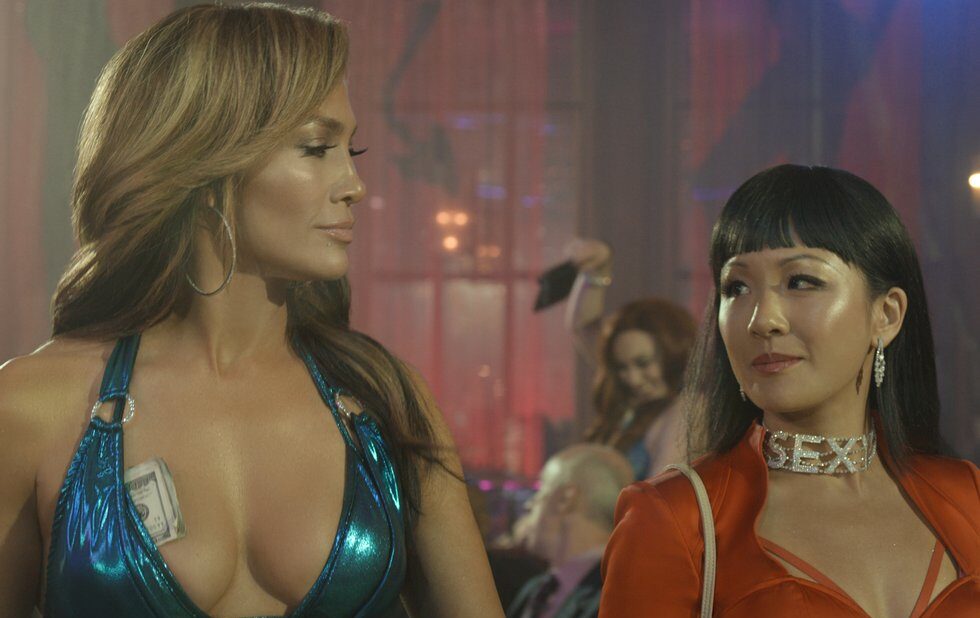 Hustlers is a Goodfellas-style caper. But here, the fellas are easy marks. It’s the women who – to quote cast member Cardi B – make the money moves.

The satisfaction is undeniable.

Constance Wu and Jennifer Lopez lead the star-studded cast, which also includes Lizzo, Keke Palmer and Lili Reinhart. Wu’s Destiny and Lopez’s Ramona are exotic dancers who graduate to grand larceny, fleecing tens of thousands by the hour from unsuspecting Wall Street types using a cocktail of seduction and ketamine. They get the guys woozy, take them to a private room and then charge a fortune on their credit cards.

The movie is based on a real life hustle orchestrated by Roselyn Keo and Samantha Barbash. Their story was reported in a 2015 article in The Cut by Jessica Pressler. In the movie, Julia Stiles plays a reporter interviewing Destiny, framing the flashback narrative as a first-person account that may not be the most reliable.

Like the article, Lorene Scafaria’s movie romanticizes the crime. The victims are from Wall Street – not anyone you need to feel bad for. As far as everyone is concerned, they perpetrated the recession. The hustle is all about taking back what those douchebags stole, and then pouring it into new Louis Vuitton bags.

But that simple justification is good enough for everyone to enjoy the mechanics of the crime. There’s a comic and celebratory vibe as the team assembles. Palmer and Reinhart’s dancers-turned-con artists join in on cooking up drugs, maxing credit cards and shopping for Louboutins (if only to avoid a life working at Old Navy).

Hustlers keeps things fun in that conventional crime movie way, but there’s also a disappointing distance between its characters. The problem may lie with Scafaria’s decision to stick close to the source material, which is limiting. There isn’t much intimate detail about Keo’s accomplices in Pressler’s article, which warns from the get-go that its main source “is an admitted liar with multiple pending felony charges.” Keo’s narration, which in turn becomes Destiny’s, is coloured by self-preservation and mistrust.

The movie doesn’t really deal with that tricky vantage point until it’s too late. And the relationships between the female leads suffer because of it. There’s a lot by way of showing female camaraderie the hugs and parties that look nice but can feel phony.

And it’s too bad, because the whole thing gets going from a wonderful moment between women early on. Destiny steals away for a rooftop smoke and finds the veteran Ramona there, clad in her g-string and a giant fur coat. It’s cold so Ramona invites Destiny to cozy up inside that fur. She stretches out her arm and takes the young dancer under her wing. The sight of it is warm and beautiful.

I didn’t really see the movie that could have grown out of that scene.