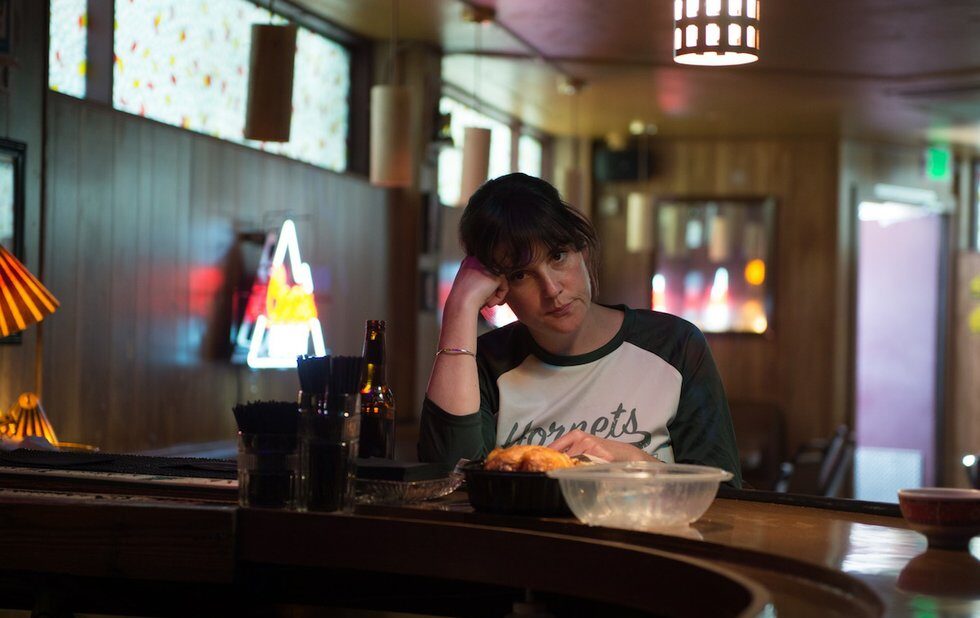 I Don’t Feel At Home In This World Anymore stars Melanie Lynskey as Ruth, a nurse who is sick of the indecency she sees all around her. She arrives home to find her house has been ransacked of her anti-depressants, laptop and grandmother’s silverware. The police blame her for leaving the door unlocked, and do little more than make a report. Her sister (Lee Eddy), a married mother with a young daughter, is barely sympathetic. “You have it better than a lot of people,” she says.

Her neighbours are similarly indifferent, save for Tony (Elijah Wood), a goofy metal head with a rat-tail braid and a fondness for nunchucks and ninja stars. They team up to solve the crime and encounter a gang of violent, pill-popping thieves with a scraggly ringleader (David Yow, of noise rock bands Scratch Acid and The Jesus Lizard) that are connected to a bougie corporate asshole that lives in a big house with a bored housewife.

Much in the way Jordan Peele shows viewers the point of view of a Black man experiencing racism in Get Out, Blair puts us in Ruth’s head as she bears silent witness to seemingly mundane indignities. She tends to a racist patient, watches a souped-up truck spew exhaust and has the plot of the sci-fi book she is reading spoiled by a patron at a bar. She’s a liberal member of the white working class that feels devalued and powerless and when the burglary leads to an insidious corporate plot, her self-pity is validated.

Blair is a regular in the films of Jeremy Saluner (Blue Ruin, The Green Room), and cribs heavily from his aesthetic via the shadowy and naturally lit locations that impart casual menace, as well as intimate violence. However, his world is more slapstick than realist. As the violence becomes gorier, the characters Ruth encounters grow increasingly one-dimensional and disposable.

Lynskey, who broke through in Peter Jackson’s Heavenly Creatures and has turned up in a couple recent Joe Swanberg films, does a great job of anchoring the film with a depressive heaviness. She is able to impart self-defeat and repressed rage in a single glance and, unlike Wood or Yow and his gang of misfits, never veers into kooky caricature. Any subtlety and nuance she brings to the film is gradually undone by the overplayed comedy and lazily conceived villains.

When the film becomes a predictable revenge fantasy, Ruth and Tony come to represent the stereotypical liberal and conservative – or the “99.9%” as an expository villain puts it – uniting against the upper class.

In many ways, I Don’t Feel At Home In This World is a throwback to the vigilante movies of the 70s. But the failed “system” in Blair’s world is not the government – it’s everyone. He made a curious decision to cast Black actors as many of the friends, neighbours and police who minimize Ruth by reminding her, as the detective (Gary Anthony Williams) does, that other people “are experiencing bigger problems.” We get a bit of back story on the detective, but for the most part the film is as dismissive of these characters as they are of Ruth. Blair attempts to grapple with the root causes of America’s frustrated and angry mood, but his view is myopic. Rather than bridge identity and class politics, he pits them against one another in an unimaginative whodunit that offers little insight into anything other than his own cultural solipsism.