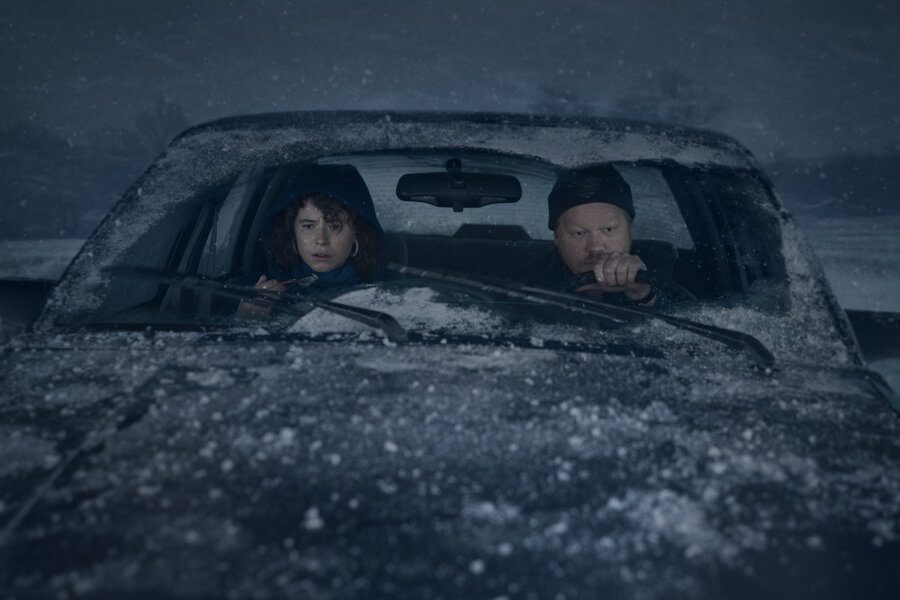 No matter what story writer/director Kaufman is telling – whatever the tone, whatever the format – it’s always going to come down to self-loathing and mortality. That’s just his deal.

His scripts for Being John Malkovich, Adaptation. and Eternal Sunshine Of The Spotless Mind are rampant with it; his directorial efforts Synecdoche, New York and Anomalisa are entirely concerned with their aging protagonists’ attempts to escape their own malfunctioning bodies.

I’m Thinking Of Ending Things, his first feature in five years (and his first project for Netflix), is similarly consumed with a soul-crushing dread of aging and dying. Time is slipping around its protagonist, a grad student called Lucy (Jessie Buckley) taking a wintry drive with her boyfriend Jake (Jesse Plemons) to meet his parents at their remote farmhouse.

She’s already uncomfortable with this trip; after only a few weeks of dating, the relationship doesn’t seem to be going terribly well, and her voiceover finds her wrestling with how and when to break the news to Jake. But she’s distracted, and uncertain, and maybe Jake can hear her thoughts? He certainly seems to respond to her inner monologue at key moments. Something’s wrong. And what was the deal with the old guy staring at her from his window as they were getting into the car? That was weird too.

The weirdness only intensifies when they get to Jake’s parents’ place: sure, his mom (Toni Collette) and dad (David Thewlis) are charming and solicitous, but why does it take them forever to materialize? And why does everything feel so strange? Why won’t they stop talking about Jake’s amazing potential when it clearly makes him uncomfortable? Why does it always feel as though a fight is about to break out?

There’s a reason for all of this in Iain Reid’s 2016 novel, but Kaufman shows as much consideration for the book’s narrative as he did for Susan Orlean’s The Orchid Thief when he spun that into the script for Adaptation. Indeed, Kaufman’s version of I’m Thinking Of Ending Things is a direct descendant of that movie, with the crucial difference being that Adaptation. was directed by Spike Jonze, who could step back from Kaufman’s toxic mixture of self-loathing and self-regard and find the tragedy of a man who can’t see his way out of the problems he’s created for himself. I’m Thinking Of Ending Things is the first time I’ve sat through a Kaufman project since Human Nature and wondered whether he has anything at all besides self-loathing and dread.

I mean, he’s not a hack: this is a striking film to watch, with actors doing their best to convey a tone of frustrated stasis. No one’s slacking on either side of the camera, and the whole movie seems crafted to unsettle the viewer on an almost subconscious level. Lucy and Jake drive to his parents through an increasingly hazardous winter storm, but neither of them ever wears a seat belt. Later in the film, a visit to a roadside snack bar practically vibrates with unspoken terror, as if the young women behind the counter are being held hostage by a gunman standing just out of sight.

It’s a scene that could have come straight out of Blue Velvet-era David Lynch, right down to the servers’ retro look, and I suspect that’s the point… but it doesn’t matter. Nothing actually matters in this movie, because nothing actually happens. I’m Thinking Of Ending Things is an exercise in drawing out tension until it simply ceases to exist, like a taffy pull at a state fair.

That’s an arcane image, I know, but it’s the only one that fits. There’s a lot of arcane imagery in I’m Thinking Of Ending Things, much of it anachronistic or discomfiting: the VHS tapes of 80s movies stacked in Jake’s childhood bedroom even though he’d have grown up with DVDs, certain clothing choices, an affectation for old musicals like Rodgers and Hammerstein’s Oklahoma!

But where Reid’s book was a slow-burn thriller, a psychological puzzle box that unpacks into horror, Kaufman’s take feels more like a dissociative episode, designed to give us the sense that something is subtly off, and then not so subtly, as Buckley’s Lucy struggles to keep herself oriented in an increasingly hostile reality… assuming anything about her experience is, in fact, real.

Like most of Kaufman’s work, I’m Thinking Of Ending Things is a surreal drift through a character’s state of mind, with Buckley’s disintegrating performance providing its emotional barometer; like his script for Adaptation., this project finds the writer injecting his own preoccupations into someone else’s narrative.

But this time the synthesis doesn’t take, oscillating into Lynchian weirdness and disorientation before ultimately collapsing into narcissistic fantasy. And I understand that it does so from a given character’s perspective, but it also feels like Kaufman is expecting the same rapturous applause for turning a meta joke in Adaptation. into an entire feature.

And while some critics are giving him what he wants, all I got out of I’m Thinking Of Ending Things was the nagging sense that Charlie Kaufman’s running on fumes.