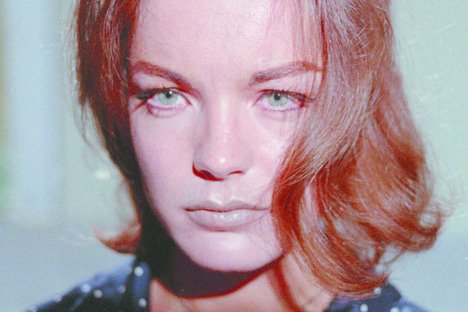 L’Enfer d’Henri-Georges Clouzot is a fascinating study of a film that never was.[rssbreak]

In 1964, the revered director of Wages Of Fear and Diabolique started production on what was supposed to be a groundbreaking thriller about a husband (Serge Reggiani) whose pathological jealousy of his wife (Romy Schneider) triggers paranoid rages and surrealistic, sexualized visions – visions that would disrupt the black-and-white drama in lurid three-strip Technicolor.

It was an ambitious proposition – too ambitious, in the end. After months of shooting, having fallen disastrously behind schedule, the production was shut down when Clouzot suffered a heart attack while directing a love scene between Schneider and co-star Dany Carrel. All that remains of L’Enfer is 15 hours of raw footage, some of which serves as the backbone of this fascinating documentary.

Serge Bromberg and Ruxandra Medrea Annonier interview surviving crew members (including Costa-Gavras, an assistant director on the shoot) and create a sense of Clouzot’s vision through partial reconstructions and staged readings of unfilmed scenes with Bérénice Bejo and Jacques Gamblin standing in for Schneider and Reggiani.

The documentary peels back layers of obsession as Clouzot, obsessed with every last detail of a movie about obsession, pushes himself, his cast and his crew to the brink of collapse to realize his vision.

What we see of the film that might have been is indeed remarkable – especially the unfinished colour footage of Schneider and her co-stars wearing green makeup and blue lipstick that makes them look like their own ghosts.

The footage would have been re-timed in post-production to realize Clouzot’s ambitious colour scheme, but that never happened. Instead, the images shift the actors into an otherworldly limbo – lost to history, along with their movie.