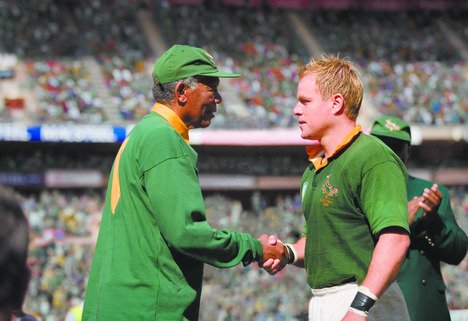 In Clint Eastwood’s Invictus, set in the mid-90s, the newly elected Nelson Mandela (a saintly Morgan Freeman) is trying to balance the expectations of the black South Africans who brought him to power against the resentments of the white citizens who fear their country has been stolen out from under them.[rssbreak]

Mandela gambles on encouraging the Springboks rugby squad to win the 1995 World Cup, which happens to be taking place in South Africa. It’s a wild leap of faith, particularly because the Springboks were a bunch of dispirited losers at the time. But nothing unites a nation like rooting for the home team.

At least that’s how Eastwood sees it – in the most obvious terms imaginable.

Everything in Invictus is dead-on, in that stiff, message-movie way. Anthony Peckham’s script is didactic to the point of silliness people are forever reminding Mandela of the importance of his actions, as though he might not know he’s walking the highest tightrope of his life. And a subplot that finds the president’s black security team forced to accept a support crew of white secret service men – literally integrating elements of the old regime into the new – could not be more thumpingly overplayed.

I understand that some heavy-handedness is required in these situations – it’s part of that Old Hollywood mentality that assures us everything will work out in the end – but Invictus is so lazily assembled that it’s impossible to invest emotionally in anything that happens.

Even the sports stuff is half-assed, with every game presented as quick cuts of shoving and running. The climactic match ends so indifferently, it feels like Eastwood got impatient with his own movie and left before the credits.

The actors do their best. Freeman sells Mandela’s good temper and limitless patience, responding to each new reminder with a practised smile-and-nod combination – he’s heard it all before, and this is the move that reassures people. And as Francois Pienaar, the captain of the Springboks, Matt Damon vanishes into the role of a contented jock entirely unprepared for the national spotlight. His first, awkward scene with Freeman is a fine duet between two assured professionals.

If the rest of the movie were as tight, smart and focused as that one moment, Invictus might actually deserve the praise that will be heaped upon it in the coming weeks.

But as somebody once said, deserve’s got nothing to do with it.