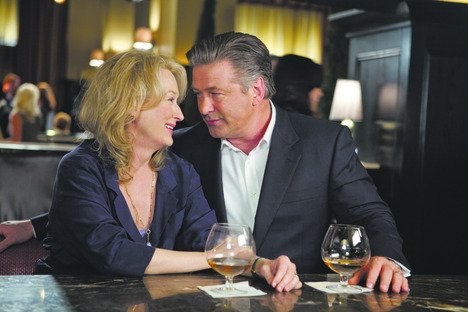 Alec Baldwin is just too much for Meryl Streep in Its Complicated.

Meryl Streep can do just about anything. Sing and dance? Sure. Accents? Definitely. Getting inside unlikeable characters? Like nobody else.[rssbreak]

But straight-out comedy? Well, no, actually. As Jane, the divorcee dealing with lustful and appealing ex Jake (Alec Baldwin) in It’s Complicated, she can’t find the right tone.

When she’s not worried about being funny and does what she does best – act rather than mug – Streep’s effective. But she doesn’t have enough variations on comic outrage in her substantial arsenal of acting tricks.

Part of the problem is writer/director Nancy Meyers’s (Something’s Gotta Give) not very subtle material. The characters are drawn with very broad strokes – Streep’s much better at nuance – and, of course, there’s the obligatory Meyersesque ridiculous sequence where they have extreme reactions to each other’s nakedness.

Kudos to Streep for showing some facial creases in the bedroom close-ups, although the lipstick of most women in post-coital bliss isn’t so perfectly applied.

Baldwin’s voracious and hilarious performance is almost too dominating. He treats every scene as if he were a fullback and every other actor on the defensive line, but he’s absolutely in control of the performance. This one, not Streep’s, should have copped the Golden Globe nom.

Steve Martin is endearing as the architect trying to get Jane’s romantic attention, and John Krasinski as Jane’s son-in-law-to-be is turning into an impressive comic force.

But except for a scene where Jane’s kids show their horror at the possibility of their parents’ reconciling, It’s Complicated is all too breezy and easy.

And Streep doesn’t do breezy and easy.