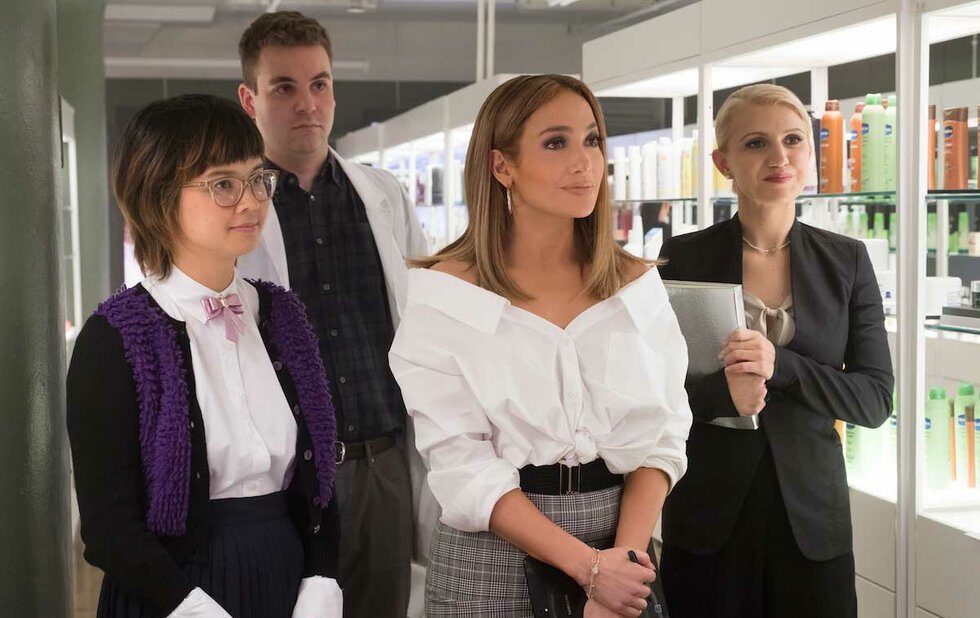 Jennifer Lopez’s latest comedy is a naked endorsement of late capitalism and patriarchy disguised as a film about female empowerment.

Which is to say it’s a classic romantic comedy that tries to pretend it’s not.

A spiritual sequel to Lopez’s Wayne Wang-directed rags-to-riches star vehicle Maid In Manhattan, Second Act is also about a working-class woman who pretends to be rich and fakes it until she makes it in corporate America.

But director Peter Segal (Tommy Boy) and screenwriters Elaine Goldsmith-Thomas and Justin Zackham are shrewd enough to sideline the romance and emphasize social politics that pander to the current moment in order to take a roundabout route to the inevitable conclusion that tells us if we just love ourselves a little more, we can have it all.

Lopez plays Maya Vargas, a 43-year-old assistant manager at a big-box store in Queens, New York, who is gunning for a promotion. Even though she’s been on staff for 15 years, introduced live-streaming in the deli and created a popular social club for local moms, her boss (Larry Miller) opts to hire Arthur (Dan Bucatinsky), a white guy with an MBA and a corny sense of humour that doesn’t gel with employee culture.

“I wish we lived in a world where street-smart equals book-smart,” Maya laments in one of the script’s many trite one-liners.

Things get worse for Maya when her boring jock boyfriend, Trey (Milo Ventimiglia), bails after finally accepting that she doesn’t want kids.

The lie gets her face-time with the CEO (Treat Williams) and his daughter Zoe (Vanessa Hudgens), but it’s Maya’s on-the-ground knowledge of the company’s sales figures that impresses. The skin-care products they advertise as all-natural don’t sell because they are not actually organic, she explains.

All the ingredients are here for a satire encompassing sexism, ageism, race, class privilege, imposter syndrome, the beauty industry and more, but as quickly as Second Act speeds into the wish-fulfillment plot, it chickens out. The second act introduces an obvious twist that effectively reframes Maya’s plight from navigating systemic societal barriers to overcoming personal problems. It turns out Maya has a secret that’s holding her back.

In the meantime, we get belaboured running jokes (Remini’s character tries to stop swearing in front of her kids Yi’s character suffers from vertigo) that quickly run out of gas, a ton of lame self-help advice and arbitrary physical comedy that doesn’t play to the actors’ strengths. A sequence involving Ashford and Yi doing street-level research about make-up trends had great improv potential, but ends up going for the cheapest laugh possible.

The way the movie echoes Lopez’s power-celeb J.Lo persona also feels like wasted potential. Her hair goes from blown out to straight once she enters the corporate world, but her hoops – which she self-consciously touches when encountering a coterie of Kardashian clones en route to her job interview – remain. When Maya tries to dress conservatively for the job interview, Remini jokes that she looks like Mrs. Doubtfire. How does she feel about corporate dress codes? This isn’t a movie that dwells on details.

Arthur makes a crack about “reverse sexism” that highlights how those in power co-opt social justice rhetoric to play victim. But whether subtly implied or clunkily executed, nods to wider social conversations are absorbed into a sanitized portrayal of corporate culture. From Williams’s grandfatherly CEO and the script barely acknowledging how Zoe benefits from being the boss’s daughter, to “disruptive” tech business positioned as the economic saviour and lines like “The only thing stopping you is you,” Second Act suggests the solution for workers unable to level up is to fix what’s wrong with themselves.

And the best way to do that is to give a big, cathartic speech in front of everyone you know.

This movie is billed as Lopez’s return to rom-coms, but Ventimiglia’s Trey pops up only when absolutely needed. Maya’s friendship with Joan and relationship to Zoe are the primary sources of comedy and drama, respectively. Although Remini and Lopez are real-life friends (Scientology whistle-blower Remini famously alleged that the Church pressured her to recruit Lopez at Tom Cruise’s wedding to Katie Holmes), their rapport feels locked into scripted beats.

Ultimately, the “rom” is more about self-love than romance. Even though Second Act centres female relationships, Maya’s self-love is the commodified kind – not the radical kind that resists or leads to collective change. Empowerment in Hollywood still requires both a high-powered job and a man – even if that means settling for a tertiary character with no personality.