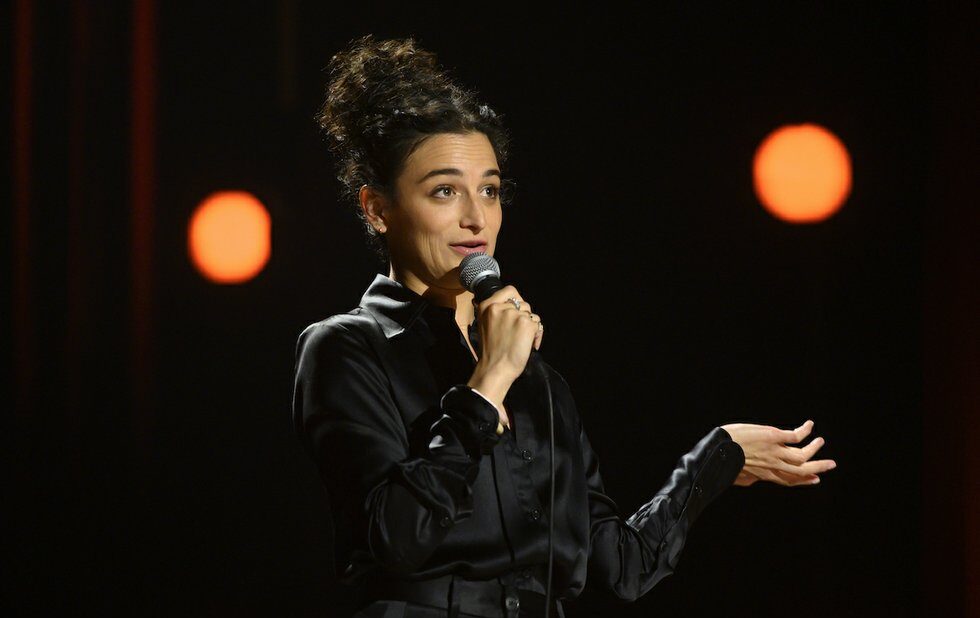 Netflix is billing Jenny Slate: Stage Fright as “an original comedy special”… but like Slate herself, it’s a little more complex than that.

The latest collaboration between Slate and director Gillian Robespierre, Stage Fright mixes footage of Slate doing stand-up at New York’s Gramercy Theater with documentary snippets in which the actor (and author) hangs out with her family, discusses her paralyzing fear of public performance and roots through her childhood for our edification.

The audience at the Gramercy is friendly, and so is the filmmaker: Robespierre directed Slate in two features, their mutual breakout Obvious Child and its 90s-set followup Landline, and the two artists clearly get one another I don’t think Slate would have been this loose with someone she didn’t trust implicitly, and Robespierre sets up a playful rhythm between the performance material and the straight documentary that turns the project’s two halves into a kind of conversation.

Stage Fright takes Slate’s stand-up material and unpacks it in a rambling, roundabout way that mirrors Slate’s own delivery. The first five minutes are an intentional mess of false starts and digressions an attempt at cheerfully introducing herself as “a human adult woman from planet Earth” goes south when she admits she’s super-sad the patriarchy has ruined the planet: “That’s also not how I wanted to start, but it is how everything will finish.”

Slate’s showing us how freaked out she is about performing in front of an audience, and Robespierre just lets the camera run as she finds her rhythm. In doing so, she nicely lays out Slate’s perspective: things are terrible, and we have every right to be furious with the state of the world, but isn’t it also kind of great that we’re all here being furious together?

Dressed in a flowy black shirt and pants – an outfit she describes as “a female tuxedo for women who like to move” – Slate’s lively, twitchy energy is infectious, and though she rarely performs in front of an audience, she’s a natural – riffing on her own ideas, owning her own neuroses, and spinning stories of childhood nightmares and grown-up bad dates with vivid self-awareness. (In fairness, the bad date wasn’t her fault the guy showed up in a full suit of armour.)

And then we have the documentary footage, which lets Slate examine her own life in a way that she can’t when she’s structuring it for punchlines. It’s not just that she thinks the house she grew up in was haunted her entire family believes it too.

There are other conversations with her parents, sisters and grandparents about more conventional subjects, but that’s the one that stuck with me most you can see how growing up convinced that you’re surrounded by spirits might nudge a child’s psyche into some unusual directions. But she learned to laugh at it, and now we can join her.