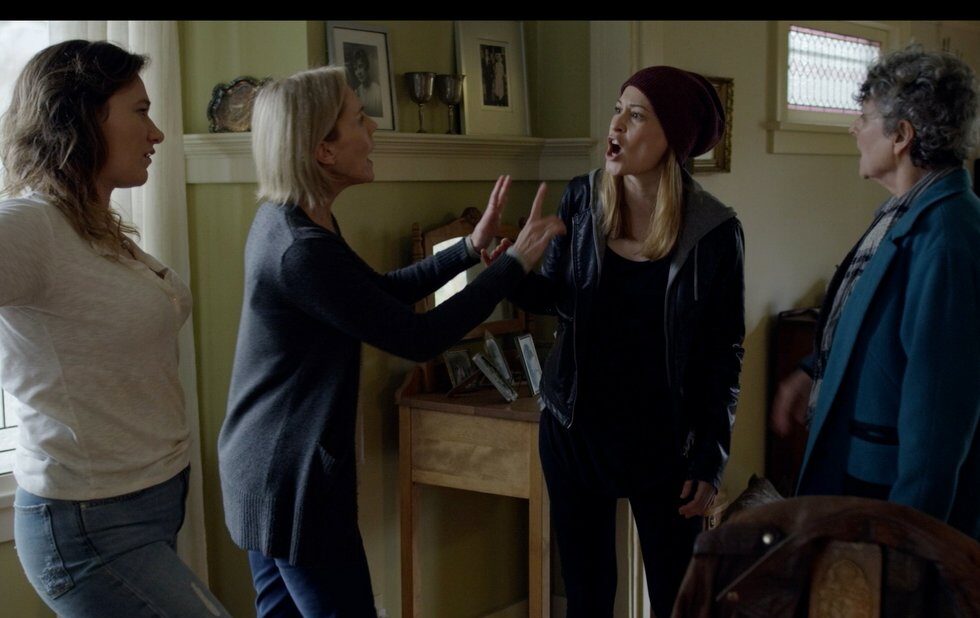 Bruce Sweeney has had a rough stretch, creatively speaking. The Sarnia-born, Vancouver-based writer/director has always specialized in a certain strand of uncomfortable character study, following people who make bad decisions for reasons they can rarely articulate.

In early pictures like Dirty and Last Wedding, that precision led to something profound, but his last two features, Crimes Of Mike Recket and The Dick Knost Show, suggested the tank was running dry. It took five years for him to follow Dick Knost with Kingsway, which premiered at TIFF in 2018 and is finally opening in Toronto this week at the Carlton. But the good news is Kingsway feels like a rebound.

Named for a little-liked stretch of road in Vancouver, Kingsway finds Sweeney shaping his usual fixations – sex, trust, intimacy, neurosis, depression – into an engaging comedy about a dysfunctional family spiraling into romantic chaos. It’s familiar material, but it works – and it’s cast with a terrific ensemble of west coast performers.

Marion Horvat (Gabrielle Rose) is a woman of a certain age trying to live her life while pretending her newly separated son Matt (Jeff Gladstone) isn’t suicidally depressed. It’s not working, and her mechanic daughter Jess (Camille Sullivan) is infuriated by what she sees as Marion’s coddling of her brother. It should also be noted that Jess is easily infuriated, which is sort of her thing.

Each of the Horvats has his or her own specific set of neuroses, which Sweeney clearly establishes and then compounds through the comings and goings of Matt’s pregnant ex Lori (Colleen Rennison), his interfering best friend (Paul Skrudland) and his endlessly patient therapist (Jennifer McLean). By the halfway point, Kingsway is chugging pleasantly along on a cascade of colliding conflicts. I haven’t even mentioned Agam Darshi as a fellow mechanic doing her best to flirt with the distracted Jess.

Both a slow-rolling farce and a genuinely thoughtful film about depression and mid-life panic, Kingsway is a modest but worthy little picture. I don’t think Sweeney snaps everything together the way he wants to, but it’s still his best movie in years.