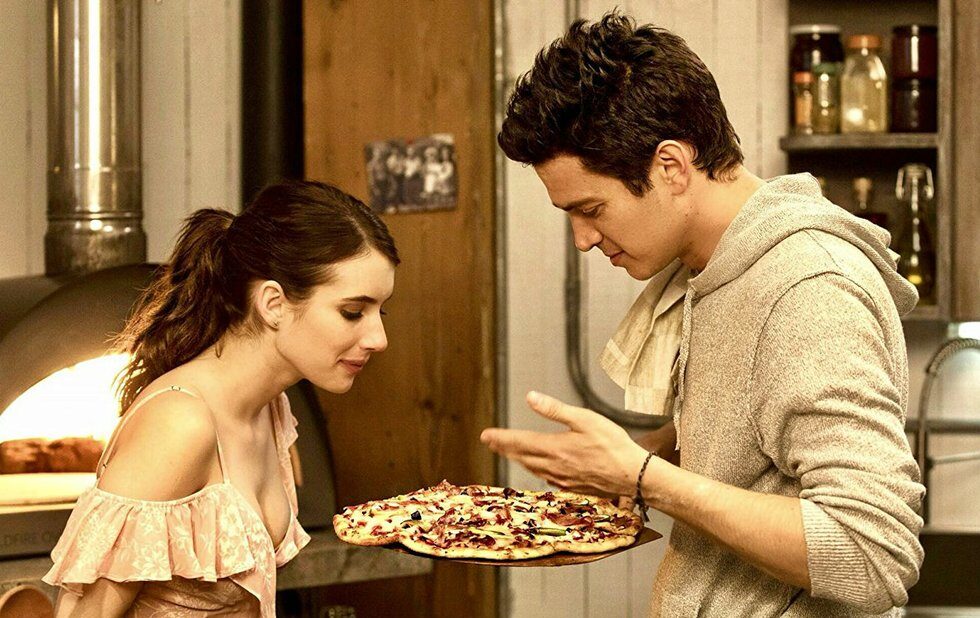 Emma Roberts and Hayden Christensen cook together in Little Italy

Emma Roberts and Hayden Christensen cook together in Little Italy, but the result is unpalatable.

If it had been released 15 years ago, Little Italy would feel like a lazy knockoff of My Big Fat Greek Wedding – a broad, pandering comedy that trots out a few ethnic stereotypes that middle-aged mainstream audiences can laugh at without feeling guilty, and folds in a one-dimensional love story to draw in the kids. Maybe Garry Marshall would have been attached to it. He could have made this kind of movie in his sleep.

But it’s 2018. Garry Marshall is dead. And Little Italy – directed by Donald Petrie, whose credits include How To Lose A Guy In 10 Days and the actual Nia Vardalos movie My Life In Ruins – feels both out of time and out of touch.

It’s not just that it’s badly written, cringingly performed and indifferently produced, but it’s so proudly phony, presenting a modern-day Toronto whose Italian community is trapped in the 70s, swaggering around making laboured Godfather references and yelling insults at each other at escalating volume. Air Canada is a prominent sponsor I have no idea why anyone thought this would be good for tourism.

Little Italy’s protagonists are Leo Campo and Nikki Angioli, childhood pals who lost touch as adults when Nikki flew off to the UK to train as a chef. Leo is played by Hayden Christensen Nikki, by Emma Roberts. Both actors have been told their characters are adorable. They have been misled.

Offered her dream job in London, Nikki returns home to settle some visa issues and finds that Leo is now all grown up and kind of a hunk – but also her mortal enemy now that their fathers are locked in a blood feud over a pizza contest. They snipe at each other from their neighbouring pizza parlours while their wives and parents quietly stay in touch.

Nikki’s grandmother (Andrea Martin) and Leo’s grandfather (Danny Aiello), we soon learn, have been hooking up on the regular, because the idea of old people having life-affirming sex is always good for a titter in these movies. You know that one aunt or uncle who thought Moonstruck was the greatest love story ever told? Little Italy is aimed directly at that aunt or uncle.

Anyway, Nikki comes home, avoids her family and goes drinking at Luigi’s bar, which is the redressed Monarch Tavern and the only location in the entire movie that’s actually in Toronto’s Little Italy. (Most of the film was shot east of the neighbourhood the two pizza parlours are a redressed condo sales office at College and Robert, and for some reason the Taste Of Little Italy festival is staged in the Distillery District.)

It’s at Luigi’s that Nikki encounters Leo, who tends bar there when he’s not working at the family pizza shop, and they’re immediately drawn back into their old childhood habits. A drunken soccer game follows sparks are reignited. I think this was the first time I wondered exactly what the age difference was between Christensen and Roberts turns out he’s 37 and she’s 27. I have no idea how old their characters are supposed to be, but neither do the actors, so it’s all good.

Incidentally, the character of Luigi is played by Andrew Phung, whom you may know as Kimchee on Kim’s Convenience. Phung is just about the only actor who’s any fun at all, simply because he knows he’s playing the wacky best friend and he’s going to enjoy himself and be loud and goofy. He’s alive in a way no one else is, and it’s kind of depressing that no one else responds to his energy.

They see each other around. They have a fun day on a scooter. They cook together while holding large glasses of wine, which the movies have taught us is a surefire way to end up in bed. Leo tells Nikki about his dream of opening an artisanal pizza place where he’d use interesting toppings and high-end doughs, and she’s nice enough not to tell him about Pizzeria Libretto.

Meanwhile, their fathers continue to torment each other while their mothers make nice and their grandparents make out (see above), and Little Italy insists that this is the funniest thing anyone has ever captured with a camera while the actors all have that cold, dead glaze in their eyes that says they tried their best, it’s a living, nobody will remember this movie in six months’ time (and even that seems generous).

There are several musical montages, a scene of Leo being sexually harassed by a policewoman (after his dad’s shop is busted for pot trafficking) that, again, is pitched as gut-bustingly hysterical when it’s really just prolonged and uncomfortable, and a climactic pizza contest. That’s followed by the obligatory race to the airport, and then this other thing that goes on even longer than Leo’s frisking and is just as uncomfortable.

It’s as if screenwriters Steve Galluccio and Vinay Virmani watched every English-language romantic comedy produced between 1986 and 2003 and decided to build Little Italy entirely out of the scenes that appeared the most often. The result is a movie that’s basically a husk it has no ideas of its own, no real thoughts about romance or relationships, and if you think it’s got anything at all to say about Toronto, well, forget about it.

I was going to be more bent out of shape about a movie this lazy and unambitious, but honestly I just don’t care. Everybody got paid, tax credits were filed and we’ll all have a nice laugh when it gets nominated for a couple of Canadian Screen Awards.

It’s the kind of movie you’ll think about watching the next time you’re on a long flight, and then you’ll come to your senses.