Review: Long Shot is a smart romantic comedy with real stuff to say about contemporary politics 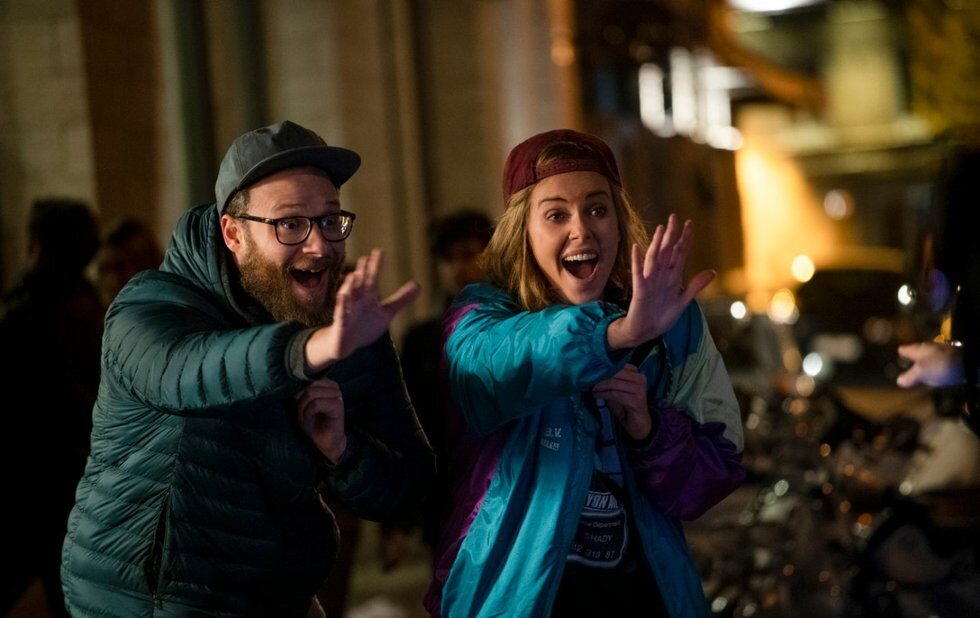 They shouldn’t even be in the same room. She’s the brilliant, powerful Secretary of State, and he’s an opinionated journalist from a scrappy Brooklyn alt-weekly. She negotiates climate policy with India and China he infiltrates neo-Nazi chapters and barely escapes with his life (and half of a swastika tattoo).

But they knew each other when they were kids, and he gets her voice, so she hires him as a speechwriter for her 2020 presidential run. And then, well, things go where they go.

That’s the setup for Long Shot, which is somehow both a raunchy Seth Rogen comedy and a very clever, slightly cynical political dramedy starring Charlize Theron as a woman trying to hold true to her own standards while making concessions to everyone else’s.

It shouldn’t work, but if you’ve seen 50/50 or The Night Before you’ll recognize Long Shot’s very specific mixture of knock-around stoner humour and actual dramatic heft. All three films were produced by Rogen and his longtime writing partner Evan Goldberg, and all three were directed by Jonathan Levine, who knows exactly how to handle this stuff.

Levine understands that the whole “Brooklyn hipster journalist falls for presidential candidate” is slightly ridiculous, so he creates a world that’s slightly ridiculous as well. They still have the Marvel movies and Boyz II Men, and American politics is still a cesspool of self-interest and mendacity, but there’s a slight elasticity to things that allows for spectacular face-plants, slapstick drug trips and impossible coincidences.

Donald Trump isn’t President, but corporate media and powerful right-wing donors installed a different sort of vain, oblivious fool. The prime minister of Canada isn’t Justin Trudeau, either, but the guy Andrew Scheer’s supporters imagine when they think about Justin Trudeau. (Don’t let anyone tell you who’s playing those characters, by the way it’ll be much funnier if you go in cold.)

In this universe, Fred Flarsky’s (Rogen) pop-eyed disbelief at running into Charlotte Field (Theron) a quarter-century after she was his babysitter – and his first crush – isn’t just good for five minutes of awkward comedy. It powers the entire first hour, as Rogen’s idealistic journalist joins her team – represented by June Diane Raphael and Ravi Patel – and gawks at the elevated world to which he suddenly has access. He’s good at his job, and terrible at almost everything else, which is the usual Rogen running gag – but one that plays as grounded and believable here, since Flarsky’s total focus on his work nicely explains his social shortcomings and lack of a life.

Charlotte doesn’t have much of a life either, having traded her personality for momentum when she entered politics reconnecting with Flarsky gives her access to a version of herself she hasn’t thought about in decades. And as their relationship evolves from professional to personal, the actors find lovely moments of warmth and gentle humour amidst all the louder comic stuff.

The core plot is a riff on the civilian-loves-celebrity setup of 90s movies like The American President and Notting Hill – comedies with big speeches about how love can bring people together and status doesn’t matter. But Long Shot is considerably more clear-eyed about the power dynamic in the relationship between Fred and Charlotte, and how the disparity in their status absolutely matters in every moment they share.

Screenwriters Dan Sterling (The Interview) and Liz Hannah (The Post) take a few wide swings, like the grasping Rupert Murdoch stand-in played by Andy Serkis, but they always understand that Charlotte and Fred are smart people flying blind, always aware of how loaded their romance might be.

A scene when Charlotte tells Fred precisely what she wants from him – and he freaks out – is kind of incredible, both because Theron finds the honesty (and the comedy) in the moment, and because I can’t think of another movie that deals with something like this as well. Or at all, really.

I’ve long felt Theron is an underrated comic actor (most recently in last year’s Gringo), and Rogen is an underrated dramatic one, so maybe it’s no surprise that they bring out the best in one another. But Long Shot doesn’t just fly along on their chemistry it’s a smartly crafted, sharply written romantic comedy with real stuff to say about the modern political landscape.

In a weird way, it’s a perfect companion piece to Knock Down The House, the amazing political documentary that just went up on Netflix. Both films are about trading gamesmanship for honesty on the stump, and the massive support system behind every candidate – not that Long Shot exactly sweats the details, mind you.