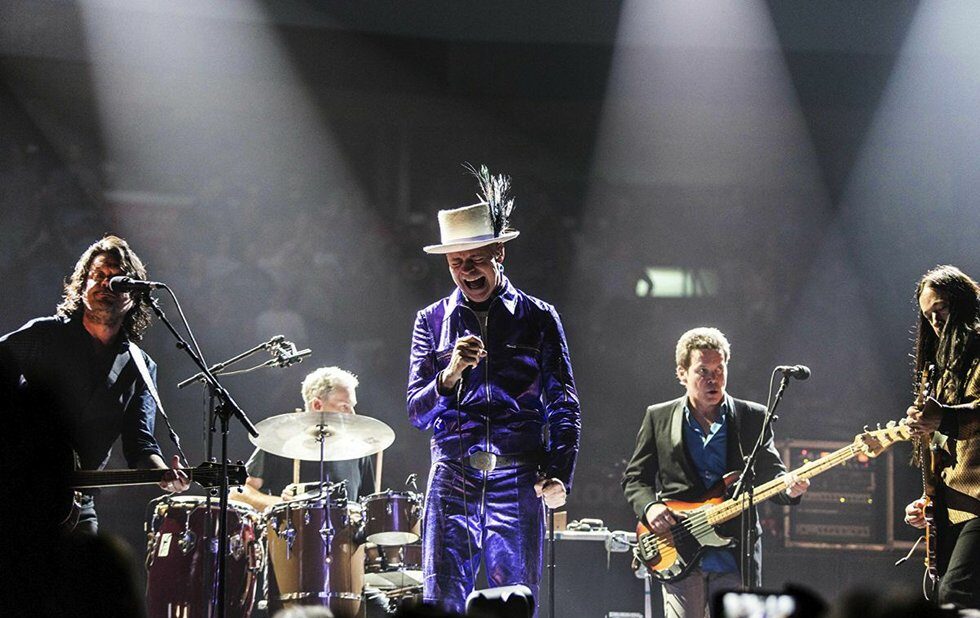 I’ve been thinking a lot about that since Gord Downie went public with his diagnosis of terminal brain cancer. If you’re a Hip fan, that’s when the heartache stabbed you, too.

Long Time Running, the new documentary by Jennifer Baichwal and Nicholas de Pencier, has that feeling – the shock of a loss that hasn’t happened yet, and the weight of grief to come – running through it. It follows the Hip on last year’s cross-Canada tour, which was both to promote their new album, Man Machine Poem, and to say goodbye to the country that’s loved them for three decades.

It is deeply sad and positively triumphant. It’s everything we need it to be.

Baichwal and de Pencier are friends of the band, and they’ve worked with them a few times in the past, but their doc work – Act Of God, Manufactured Landscapes, Watermark – tends toward the cerebral and metaphysical. They’ve never made a concert movie, let alone one with virtually no lead time. Their friends asked them to do it and they said yes, because how could they not?

Long Time Running opens at one of the final concerts, de Pencier’s camera sweeping across a crowd of people wearing shirts from a dozen different tours. In every shot, at least one person is crying. This is their last Hip concert, and they know it.

The band knows it, too, and despite the terrible strain on their frontman – a strain shared over the course of the tour by Paul Langlois, Johnny Fay, Gord Sinclair and Rob Baker, who knew better than anyone how frail Downie really was – they go out and play. And they are magnificent.

I don’t know whether another filmmaking team might have been able to get some of the footage that Baichwal and de Pencier have included. We see the band’s first rehearsal session with a still-weak Downie, after two surgeries and rounds of radiation and chemo left him reaching for words and struggling with an erratic memory. We see Downie’s doctors at Sunnybrook choking back their own tears as they talk about his prognosis, and how the tour could simply be too much for him.

We see the band discuss contingency plans with the tour staff: a half-dozen teleprompters in case Downie blanks on lyrics, a special medical unit in case of an onstage collapse, and so on. Some of these people have been with the Hip since the late 80s. This is breaking them, but they go through it over and over again.

And then we see Downie take the stage in Victoria, in one of the ridiculous metallic suits he commissioned for the tour, and the band strikes up and within maybe 30 seconds the life is shining out of him so goddamn brightly. At that point I was sobbing openly in the screening room, and I wasn’t the only one.

Baichwal, de Pencier and editor Roland Schlimme have constructed Long Time Running as a celebration of the Hip, and as a farewell for Gord Downie. He knows it – there’s no way they wouldn’t have discussed it – and in his interview segments he offers up a couple of wonderful stories that would not be out of place at a wake.

But a wake isn’t all downbeat, and as we experienced after the deaths of David Bowie and Prince last year, it’s impossible to listen to the Hip and stay sad. Their songs can get dark but they have a hell of a beat, and the half-dozen numbers that Baichwal and de Pencier include in their entirety will raise your spirits even as you blubber through them.

When the Toronto crowd sings back a key verse of Bobcaygeon, I’m pretty sure my heart broke when Downie screams “here, now” over and over again in the Kingston performance of Grace Too, it feels like an incantation as much as a refrain. It’s been a year since I watched that concert, along with a third of the country, and I thought time would give me some distance. Long Time Running brings it all back like a hammer.

Some documentaries are acts of journalism, others acts of worship. Long Time Running is an act of love, made by people who are emotionally invested in their subject and are just as broken by this tragic turn of events as the rest of us.

I cannot imagine what it was like for Baichwal and de Pencier to make this movie, but I am so, so grateful that they did. It’s a chance to see the band at their best, and a way to say goodbye. The heartache still stabs, but now there’s a place to put the pain.