There's too many ABBA deep cuts and not enough Meryl Streep, but plenty of eye candy plus Cher and Dancing Queen 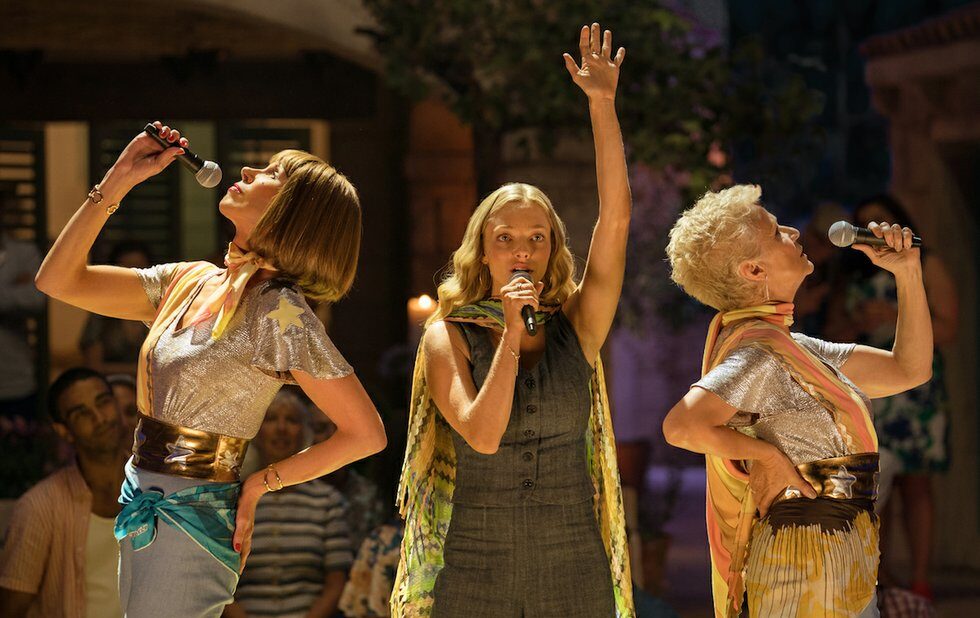 Just try throwing shade at Mamma Mia! Here We Go Again. Its relentlessly sunny spirit will burn right through it.

The movie version of the stage musical Mamma Mia! became a smash hit in 2008, rocking assumptions about what a summer movie had to be. The trick? Forget about the fanboys’ passion for actioners, superheroes and cartoons and remember that women over 30 like to go to the movies, too.

The spectacular numbers – $616,000,000, not including DVD sales – made a sequel inevitable, despite the fact that the best of ABBA’s catalogue was already mined the first time around and the original’s incandescent Meryl Streep was unlikely to star again.

Writer/director Ol Parker and his team solve those problems by giving Streep a small role and reprising the most popular of ABBA’s hits.

The story itself is both sequel and prequel. Sophie (Amanda Seyfried) is set to reopen the hotel her mother Donna was planning to rejuvenate alongside husband Sam (Pierce Brosnan, who still can’t sing), but Sophie’s having a hard time celebrating. She is still grieving Donna’s death from a year ago (not a spoiler) and boyfriend Sky is in New York having to consider a tempting job offer there.

As Sophie makes preparations for the grand opening, the film flashes back to her mother’s first arrival on the Greek island of Kalokairi (played here by a coastal village in Croatia) and her hook-ups with Sophie’s three possible dads Sam (Jeremy Irvine), Bill (Josh Dylan) and Harry (Hugh Skinner).

Downton Abbey’s Lily James plays the young Donna with high energy and excellent singing chops, giving the flashbacks some depth. Though Colin Firth and Stellan Skarsgård are back as Harry and Bill, the sequel sections work best when Christine Baranski and Julie Walters are in the picture as Donna’s long-time besties, Tanya and Rose, back with more banter – Baranski’s timing is superb. Their younger versions, Jessica Keenan Wynn and Alexa Davies, can’t quite measure up.

The movie has its problems. There really isn’t much of a story, but the whole point is to get to the tunes and the dance numbers. The first of those, When I Kissed The Teacher, set at Sophie’s graduation and presented with zero irony, feels plain wrong in the context of the #MeToo movement. There are more ballads than necessary and Sophie’s conflict with Sky plays out in a weird way.

But when the camera pans to the gorgeous seacoast, the guests arrive at Sophie’s big party bellowing the beloved Dancing Queen and Sophie’s grandmother (Cher!) arrives, you forgive everything.

An unexpected surprise is the presence of our homegrown Dora-winning talent Maria Vacratsis, playing a taverna owner who takes young Donna under her wing with a great combo of gruffness and warmth.

And when Streep arrives on screen (finally), singing a duet with Sophie, she gives this piece of fluff an emotional jolt. Then again, Streep can elevate anything.