Review: Matthias & Maxime is a solid rebound for Xavier Dolan 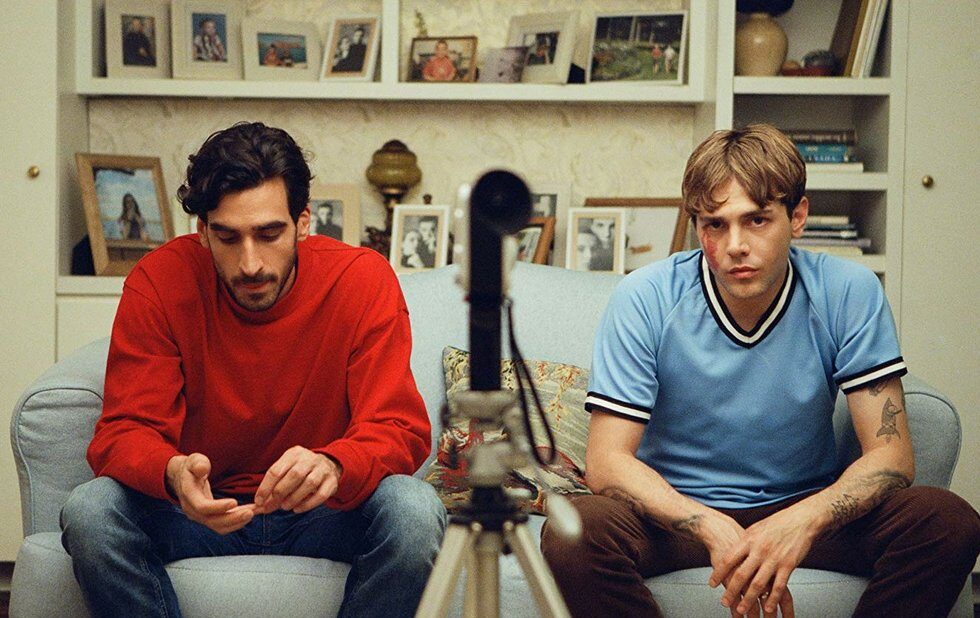 Xavier Dolan  has spent much of the past decade putting queer rage and repression onscreen with a polarizing fury. The Montreal writer/director’s eighth feature is similar to his past work, but there’s a twist: Matthias & Maxime is about a group of (ostensibly) straight guys. Though he doesn’t stray too far from his usual themes and tropes (Tempestuous mother-son relationship? Check), this slight flip of the script has resulted in his most engaging and modest film in years.

The film opens with lifelong friends Matthias (Gabriel D’Almeida Freitas), a clean-cut middle-class guy, and Maxime (Dolan), a working-class guy with a large facial birthmark, stopped at a traffic light. Maxime looks up at a billboard ad displaying a pastoral photo of a stereotypical white nuclear family and and the tagline “our daily bread.”

They are en route to their friend Rivette’s (Pier-Luc Funk) cottage to hang with friends, mostly dudes. Rivette’s younger Gen Z sister Erika (Camille Felton), is in the mix, and she ropes Matthias and Maxime into making out with each other for an “impressionist and expressionist” short film she is making.

Erika’s generous and unashamed use of English slang is the subject of ridicule during a hyperactive hang-out scene full of overlapping bravado, one-upmanship, grammar jokes and, in a big wink to the audience, a Denys Arcand reference.

The guys dismiss Erika as a “bimbo,” but she is unfazed and plugs ahead with her film. Ahead of the makeout sesh, which Dolan doesn’t show, she explains in a reassuring pep talk that sexual fluidity is now the order of the day, so there’s no reason to be self-conscious.

When the cottage weekend ends, Maxime prepares to leave for an extended trip to Melbourne while fighting with his mean, alcoholic mother (Anne Dorval, nasty as hell). Meanwhile, Matthias returns to his corporate job, which involves showing a flirty Anglo bro from Toronto (Harris Dickinson, sexy as hell) around Montreal. Each grows withdrawn and it becomes apparent their brief physical intimacy, coupled with Maxime’s imminent departure, has caused unspoken quarter-life crises that permeate their close relationships in the lead-up to Maxime’s goodbye parties.

Matthias & Maxime is a solid rebound for Dolan in the wake of his obnoxiously self-righteous English-language debut, The Death And Life Of John F. Donovan.

For the first 90 minutes, the film unfolds as if liberated from narrative. Instead, the focus is on the intensity of feeling and the raucous friend-group dynamic. Dolan, working again with DP André Turpin, fluidly shifts perspective on the action to create a loud-quiet style that references and tempers his maximalist past in interesting ways.

As if taking cues from Erika’s impressionist-expressionist mashup, Dolan gives us intense subjectivity in contemplative moments, including a solo swimming sequence that slips into full abstraction. Then he zooms out in talky scenes packed with flamboyant characters. None of the cast is wasted in these ensemble scenes, though Dolan has a tendency to reduce women characters – young and old – to dull caricature.

The film’s lively debates seem designed to reflect the particular nuances of generational change in Quebec (the province’s headline-grabbing racism is vaguely suggested via the boomer characters who bring up race in cursory ways) and echo Dolan’s primary concern: the way heteronormativity limits how men think about love and friendship. All the chest-puffing jockeying and sardonic dialogue serve to emphasize what is unsaid as Matthias and Maxime seem to avoid one another – until they can’t. They will clearly miss each other when Maxime leaves, but do they love each other? If so, in what way?

In key moments, Dolan charts the progression of the central relationship through window frames, evoking the claustrophobia of his past experiments (notably Mommy) with aspect ratios. This visual repetition comes to a head in an arresting and satisfying climactic shot that suggests emotional progression, but perhaps not the answer the characters are looking for.

The final 20-odd minutes slip into more predictable paces, though the director keeps viewers on their toes with a long take of Maxime spelling out his email address in painfully bad English and blasting a choice Britney Spears track in a strip-club scene.

Men who struggle to be vulnerable is a big theme in cinema lately (Ad Astra being a major example), but Matthias & Maxime goes deeper than most – even if it fumbles, albeit fittingly, toward its conclusion.