The characters are thin, the storytelling confusing and the CG action feels like a video game 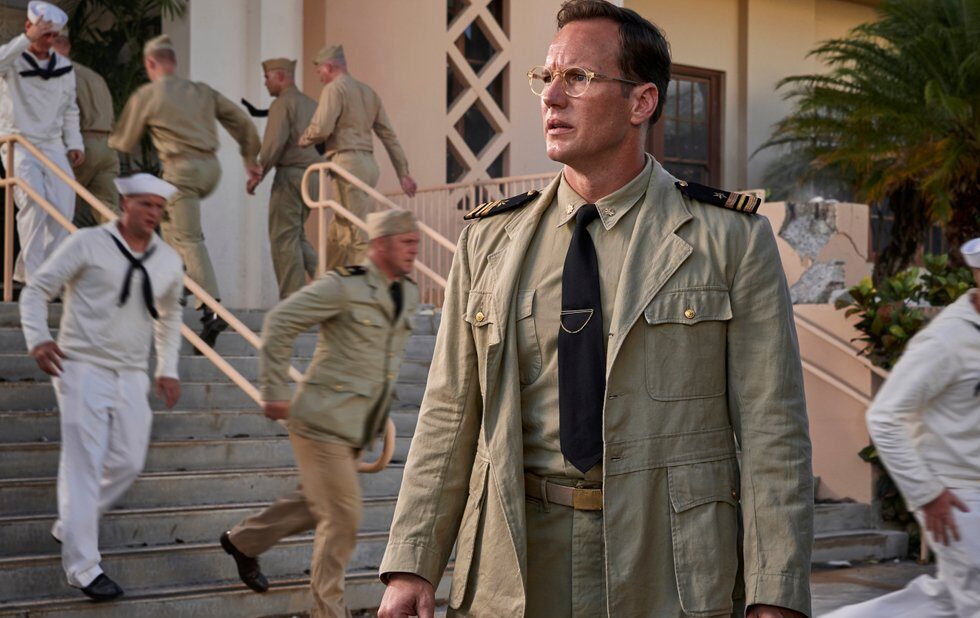 Patrick Wilson looks as disoriented as you will be after watching Midway.

Consumer advisory: Roland Emmerich’s Midway doesn’t get to the battle of Midway until almost two-thirds of the way through its bloated running time. But that’s the least of its problems.

Before he can reach the June 1942 confrontation between American and Japanese naval forces, which arguably changed the direction of the Second World War, producer/director Emmerich must take us through five years of prologue, which includes the Japanese attack on Pearl Harbor and America’s retaliatory strike on Tokyo.

Midway itself serves as the climax for a film that plays out as all climax, all the time, a monotonous drumbeat of actors either exchanging information in hushed, worried tones or shouting their way through a digital miasma of firefights and explosions. Sometimes they’re in planes, sometimes they’re on boats, but they’re always clenched and furious and bucking for revenge. That might be an accurate depiction of the wartime mentality, but it makes for monotonous drama.

It’s a surprise that Emmerich can’t find a way to bring this material to life the way he did in the ensemble disaster movies on which he built his rep: Independence Day, The Day After Tomorrow and 2012. (There’s also that Godzilla movie we don’t talk about, but I’m choosing to honour the social contract.)

Those films mixed old-school pacing with eccentric performers – your Smiths and Goldblums, your Gyllenhaals and Rossums, your Cusacks and Peets – willing to push against the constraints of the genre. Midway is undone by an abundance of respect for the material: everyone is taking it so seriously that it becomes a march. The film never stops to breathe, to note the passage of time between its events or even give us time to get to know its characters.

And even then, screenwriter Wes Tooke betrays him. In the run-up to Midway, when Wilson’s Layton tells Harrelson’s Admiral Nimitz that an intelligence source is the most brilliant man he’s ever met, we’re led to think it’s Toyokawa’s Yamamoto, whom we saw Layton meet in 1937 and who, maybe, might be supplying him with information in order to undermine the Japanese war effort.

That would be something, and for a moment I was engaged with Midway on a narrative level. But I was reading too much into things: Layton’s man turns out to be an American code-breaker we’ve yet to meet, and who then has to be introduced to Nimitz (and to us) in a generic eccentric-genius scene we’ve seen a dozen times before … and which is ultimately pointless, because Layton – who we’ve already been told has been right about everything all along – has already vouched for the guy.

This is a problem, because if we can’t invest in the characters, there’s no way to connect to the constant CG action, which plays like a video game where fighter planes dive at destroyers over and over again.

It makes Midway feel overstuffed and empty at the same time, it’s still a modest improvement on the flat-out terrible Stonewall and Independence Day: Resurgence. Take that for what it’s worth.