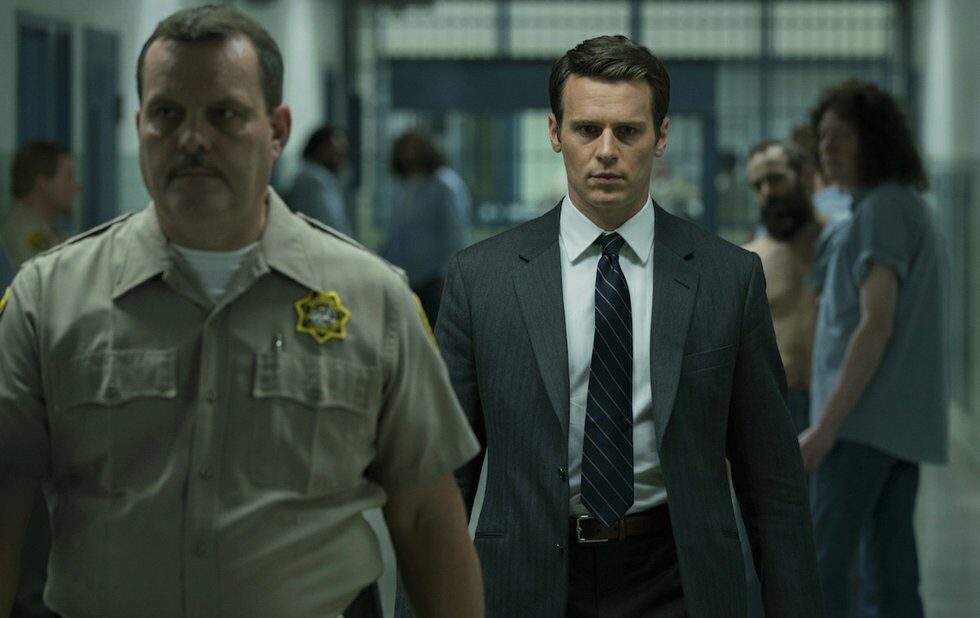 The buzz around the new Netflix series Mindhunter has been building for a while, and with good reason. So why the low rating? Read on.

Mindhunter is a drama about the early days of FBI profiling, the science of hunting aberrant criminals (like rapists and serial killers) by figuring out their histories, motivations and signatures – a science pioneered by John Douglas, whose work inspired Thomas Harris to write Red Dragon and The Silence Of The Lambs, the books that gave us the modern boogeyman Hannibal Lecter.

And four of its 10 episodes are directed by David Fincher, who also served as exec producer alongside actor Charlize Theron. He brought the serial-killer genre to a new high two decades ago with Seven and has been making mostly terrific cinema ever since. (And on television, too. He directed the first two episodes of the Netflix smash House Of Cards, starring Seven’s very own Kevin Spacey.)

Set in 1977, the show follows naïve young agent Holden Ford (Jonathan Groff), a hostage negotiator transferred to the FBI’s nascent Behavioural Sciences Unit, where he seeks out new theories of criminal psychology to update the bureau’s ancient tactics of shouting at disturbed people and then shooting them.

Ford is basically Douglas, though I don’t think Douglas was quite the corn-fed hayseed that Groff portrays. Ultimately joined by the older, wearier agent Bill Tench (Holt McCallany), Ford develops his new theories on the fly, applying them to cases as each ugly new opportunity presents itself.

The show is handsome and expensive, from Christopher Probst’s gorgeous camerawork to the deft production design. (I’m not sure anyone was using whiteboards 40 years ago, but other than that it’s impeccably detailed.)

All the prestige TV markers have been checked. But I turned Mindhunter off after the first episode, and I can’t see myself going back.

Yes, the history of psychological profiling is an interesting one. But it’s been strip-mined over the decades by lurid television shows like Criminal Minds and CSI and Lie To Me and Profiler – not to mention the dozens of serial-killer movies that focus on the monster-hunters, up to and including those adapted from Harris’s Hannibal Lecter books. (Oh, and let’s not leave out Bryan Fuller’s exquisite Hannibal series, either.)

Mindhunter may have the stamp of authenticity – up to a point, anyway – but as told by screenwriter and creator Joe Penhall, it’s a dull show about people slowly coming to realize things the audience already innately understands. We’re not just ahead of them, we’re decades ahead – and these characters aren’t interesting enough to justify our patience.

Now, it’s possible to make interesting drama out of a foregone conclusion – Terence Winter did it with Boardwalk Empire, and David Simon is doing it right now with The Deuce – but those shows are packed with drama and interesting personalities. Mindhunter, not so much.

It’s slow to start, wasting time on the square Ford’s opposites-attract romance with liberal-minded college student Debbie (Hannah Gross, who’s so much better than her material) and wheezing through scenes where white men in suits talk to other white men in suits, and then go elsewhere to talk to another set of white men in suits. McCallany’s Tench is a more interesting character than Groff, but not because of anything in the script either McCallany is just a more engaging actor, or Groff is doing too good a job at shutting himself down to play Ford.

Everything about this show feels worn and old, and not just because it’s set in the past when Ford goes to see the contemporaneous Dog Day Afternoon, the clips of Al Pacino, Charles Durning and Chris Sarandon crackle with life, putting the show around it to shame. It’s clearly a choice by Fincher and Penhall to dull everything down, but it doesn’t work there’s no tension and no momentum, just room tone.