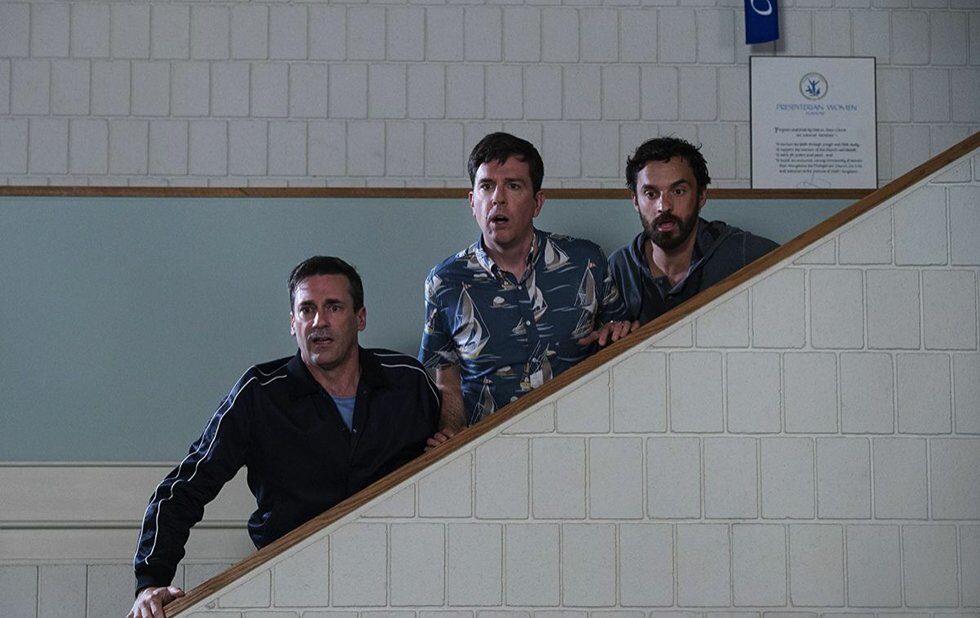 Jon Hamm (left), Ed Helms and Jake Johnson are game for anything in Tag.

Tag may not be one for the ages, but it’s a pretty fun time.

It’s the latest hyperactive, gleefully foul-mouthed comedy about grown men behaving like children from the studio that gave us the Hangover and Horrible Bosses movies.

But director Jeff Tomsic finds a context that makes sense. Our heroes have been playing the same game of tag since they were in middle school, abandoning common sense, good manners and basic social graces for the entire month of May. Of course they regress.

Hannibal Buress, Jon Hamm, Ed Helms, Jake Johnson and Jeremy Renner have a 12-year age range between them, but that doesn’t matter they get the energy right, suggesting warm relationships forged over decades in the goofiest of circumstances. And Tomsic – a veteran of dozens of TV comedies and stand-up specials – pilfers the appropriate action-movie aesthetics for the small-scale chase sequences.

The plot is simple. Threatened with the possibility that this is their last year of play, Helms, Hamm, Johnson and Buress race around suburban Spokane trying to nail the wily, never-been-tagged Renner on the weekend of his wedding. (Renner’s take on his character is basically his performance from The Bourne Legacy, which actually works very nicely.)

It wouldn’t be a game without spectators, of course. Annabelle Wallis is a Wall Street Journal writer who comes along for the ride – a way to subliminally remind us the script was Inspired By Actual Events – while Isla Fisher goes big as Helms’s hyper-competitive wife, Rashida Jones pops up as an old flame of Hamm’s and Johnson’s and Leslie Bibb brings a brittle edge to the role of Renner’s fiancée.

The whole thing is frantic and shrieky and often very funny – thanks mostly to Hamm’s indignant deadpan and Buress’s distinctive line readings, which make everything he says seem like a non sequitur. (The guy’s a treasure.) And the movie’s commitment to left-field laughs extends all the way to its closing credits, which… well, I’ll just call them unexpected, and leave it at that.