HANNAH GADSBY: NANETTE (Madeleine Parry/Jon Olb). Streaming on Netflix. Rating: NNNNNNanette is a comedy special that isnt out to make. 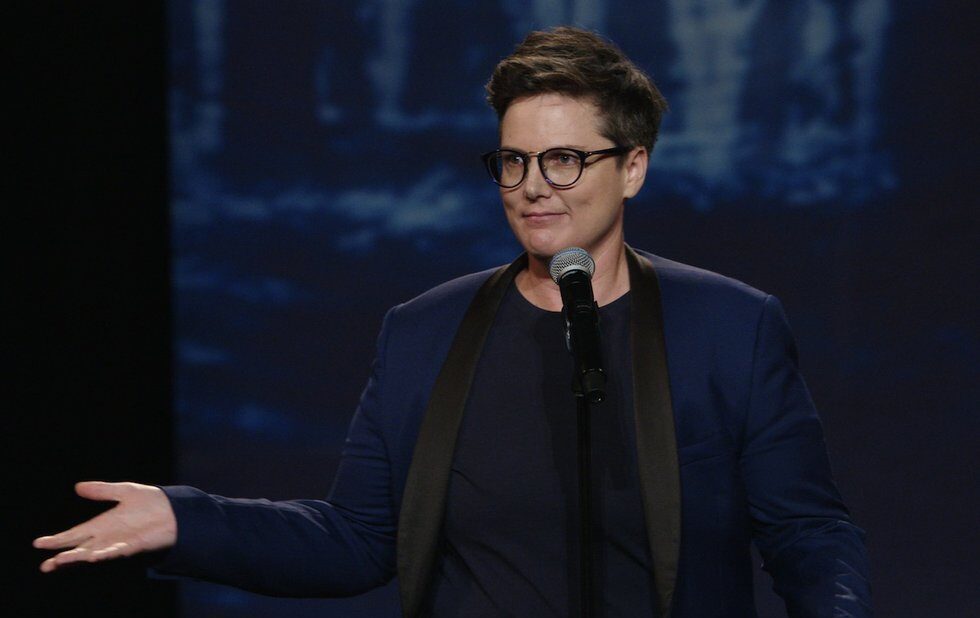 Nanette is a comedy special that isnt out to make you laugh. The structure and intent of the hour-long set works so outside of what comedy does and works so well that dare I say its a moment of genius.

Can I say genius? Hannah Gadsby is a gender non-conforming lesbian, so under the traditional guidelines of who can be labelled a genius, I cannot. But fuck all that. Its this kind of questioning of patriarchal norms and rewriting of rules that Gadsby tackles in Nanette. So, taking her cue, Im going to go ahead and call it genius flaws and all.

Comedys general rule is that no subject is out of bounds, no matter how sensitive it is, as long as a comedian can make the audience laugh. Gadsby does this with incredible command as she traverses coming- out stories, mental illness and medication and growing up gay in Tasmania during a polarizing national debate about whether homosexuality should be legalized (it was in 1997). Shes a master at creating tension by introducing harrowing topics and then diffusing it with a whip-smart punchline.

So, a joke about a real-life incident at a bus station where a guy threatened to beat her up because she was flirting with his girlfriend ends with his realization that Gadsby isnt a man. I thought you were a fucking faggot trying to crack on my girlfriend, he apologizes.

Gadsby lets that one sink in with her audience for a beat, but the nervous energy with which she lets equally layered one-liners fly is fast and effortless. The male gaze is the real and unnamed target of her crack on lesbians: Do they even exist if no ones watching? Life is breathed in a well-known idiom as Gadsby celebrates her identity and laments the pay gap in one fell swoop: I wouldnt be a straight, white man if you paid me. Although the pay would be substantially better.

But then something unsettling happens midway through the set and Gadsby starts breaking the rules. She deconstructs the jokes she told in the first half, rendering them unfunny. After all, how can you laugh when she reveals that the guy at the bus station returned after realizing his mistake and brutally beat Gadsby, who dragged herself home, never reporting the incident to police? She could have crafted punchlines out of being sexually abused as a child, physically assaulted at 17 and raped by two men at 20. Plenty of comedians have made light of these issues. But Gadsbys had enough.

The second half of the set gives way to anger. She explains that jokes have two parts, a beginning and a middle, while stories have three: a beginning, middle and end. Gadsbys tired of chopping off the end of her stories, arresting her experience at its trauma point and sealing it off into jokes in order to ensure a laugh.

She tells her audience that its time for her to tell her story properly and perhaps comedy isnt the vehicle to accomplish that.

Ive built a career off of self-deprecating humour, but do you know what self-deprecating means when it comes from someone who already exists in the margins? she asks earnestly. I put myself down in order to seek permission to speak and I will not do that to myself or anyone who identifies with me.

Gadsby threatens to blow up her career at precisely the moment her career blows up. Primarily known in her native Australia and the UK, Nanette has brought the comic international plaudits. The New York Times recently hailed her as a major new voice in comedy.

Despite its brilliance, Nanette isnt a tight set. An extended bit about misogyny in the Western art canon, where women are treated as flesh vases for dick flowers, slows the momentum. Gadsby has a degree in art history and her considerable knowledge on the subject, and her ability to weave it into the sets overarching themes of patriarchy and mental health is intellectually impressive, but it weighs down the anger and tension shes so righteously built up and unleashed on her audience.

It does provide food for thought, though. Earlier, I called Nanette a work of genius. Again, taking Gadsbys cue, Im going to unravel the label that I imposed on her. The geniuses of Western art (Gadsby singles out Picasso for a particularly fierce and clear-eyed attack) and the geniuses of comedy (she admits that Bill Cosby used to be the comic she most admired) receive the designation off the back of toxic ideas about aggressive individual achievement, male perspectives masquerading as universal ones and barriers to access, which create rarified spaces for a privileged few.

Gadsbys work isnt genius. It doesnt exist in this space. It is something else entirely, though, and in its rescrambling and redefining of what can take place on a comedy stage, its a beast that other sets are going to have to contend with this year.