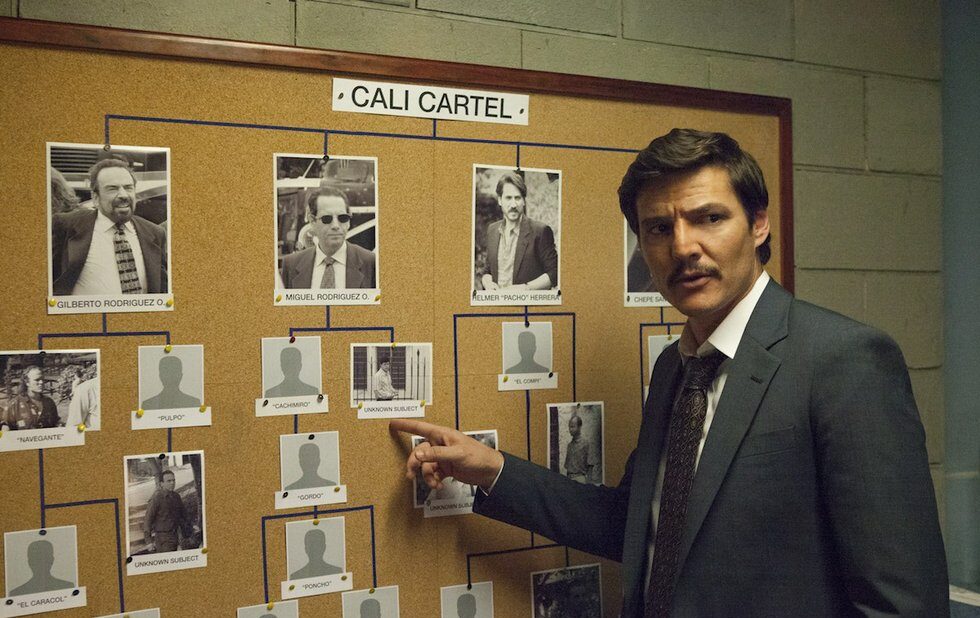 After two seasons covering the wild, labyrinthine and monstrous legacy left by Pablo Escobar, Narcos begins the slow crawl out from under his shadow.

The mass murdering family man, as played by the excellent Wagner Moura, defined the series until his character’s much-hyped death scene at the end of season two.

He was both its near-mythical centre of gravity (dwarfing any opportunity for other characters to leave an impression) and a hindrance on its storytelling the series often felt like it was panting trying to keep up with his insanity and reach.

Season three seizes the vacuum left by Escobar as an opportunity to bring an intricate, thrilling and ultimately depressing narrative to the fore. Its craft is reminiscent of The Wire’s latter seasons.

Pedro Pascal returns as DEA agent Javier Pena, more for some continuity in the series than anything the real-life figure did to take down the Cali Cartel. Fans will remember Cali as the sharper and more seemingly dignified four-man executive whose extremely organized structure quietly made billions while Escobar made all the noise. With Escobar gone, Cali becomes the DEA’s focus in Colombia, and the season begins with their rather anti-climactic response: retirement.

Cali head Gilberto Rodriguez Orejuela (Damian Alcazar) announces to his partners Miguel (Francisco Denis), Pacho (Alberto Ammann) and Chepe and other associates an agreement with bought politicians to forfeit trafficking operations, serve minimal jail-time and then live off their legitimate enterprises. Anyone who has seen The Godfather Part II can assume these plans don’t work out.

Pena and his team begin meddling with the crooked deal, unsatisfied with a slap on the wrist for Cali. This cartel didn’t grab as many headlines to stoke public fury as Escobar, mostly because their carnage amounted to a fraction and wasn’t on display. Their totalitarian rule just looked nicer.

And so over 10 breathless episodes, Pena’s team get to work on a gamed system. They dupe corrupt politicians, police and Americans in a plot that devilishly ricochets between moving parts so wide and varied it’s amazing how the showrunners streamline it into a fleet, coherent plot without a single wasted episode.

While this season is far more of an ensemble affair, without a Pablo sucking up all the air, the character that anchors things is Jorge Salcedo, a crafty engineer who ran cartel security while pulling off a tightrope act to assist the DEA. Played by Matias Varela, Jorge is meek and watchful, his brow working overtime to disguise all the fear raging inside.

You know his arc if you’ve seen Donnie Brasco or The Departed, but he carries the nail-biting balancing act and it’s next level.