TV Review: Nobody is innocent in Netflix’s Tiger King 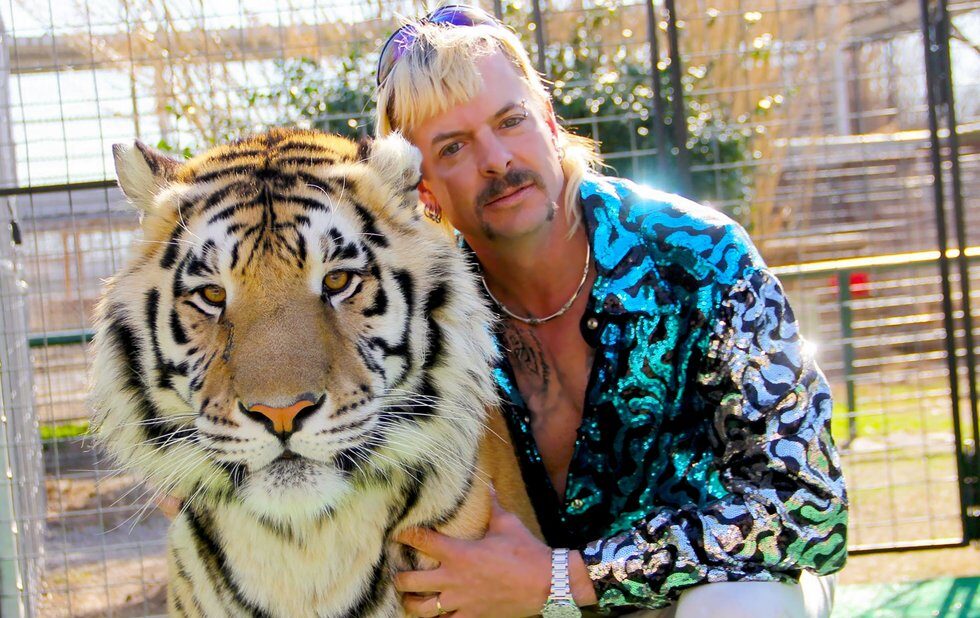 Joseph Maldonado-Passage, aka Joe Exotic, poses with one of his tigers in Tiger King: Murder, Mayhem And Madness

Netflix has made a killing with true-crime shows like Making A Murderer and the Luca Magnotta series Don’t Fuck With Cats. They are riveting and addictive, but ultimately leave you feeling a little icky. These shows are entertainment about terrible things done to innocent people, after all.

Nobody is innocent in Tiger King. The people you assume to be victims turn out to be perpetrators a couple of episodes later, or perhaps even murderers. And so you can feel guilt-free while being shamelessly entertained by the toxic shenanigans between feuding Southern zookeepers who clutch onto wild cats and assault rifles, make country music videos while shopping for contract killers and even mount presidential campaigns. This show feels like Florida Man unchained.

The self-proclaimed Tiger King is Oklahoma petting zoo owner Joseph Maldonado-Passage, aka Joe Exotic. He is a proudly gay, pistol-toting redneck who wears a mullet and eyeliner a man who benefits from both the second amendment and legalized same-sex marriage. In many ways, he’s a walking contradiction: both entertaining and appalling, sensitive and ruthless. He’s a cub with big claws. Or perhaps the claws, like his roar, are just for show.

Like everyone in this show, he contains multitudes, and directors Eric Goode and Rebecca Chaiklin have a terrific time revealing his layers over seven episodes. The filmmakers had generous access to both Joe and the colourful characters in his orbit, which includes fellow zookeeper Bhagavan “Doc” Antle (who keeps lions and tigers and a harem of young wives) and former drug lord Mario Tabraue, the guy who is said to have inspired Al Pacino’s Tony Montana in Scarface.

In this circus of larger-than-life characters, it’s Joe who is the loud and obnoxious gravitational centre. Even the real-life Tony Montana seems quaint next to him.

The show’s fascinating and chaotic energy emanates from Joe’s joys and tantrums as he wages an interstate war with Carole Baskin, an animal rights activist who owns Big Cat Rescue in Tampa, a sanctuary for tigers, ligers and more. Baskin makes it her mission to shut down zookeepers like Joe and Doc Antle who breed tigers and sell the cubs across the country. Joe retaliates with crude YouTube videos and character attacks on Baskin.

They go back and forth, online and in court, with other shady characters drawn into a feud with plenty of collateral damage to go around. Their antics have been featured on newscasts and Hard Copy. The series itself tends to feel like multiple episodes of Hard Copy mashed together.

Tiger King could be tighter. Goode and Chaiklin tend to double back on scenes, revealing information kept hidden the first time around, dragging things out to keep us on their leash. At times, that helps illustrate how duplicitous everyone is. But other times, it drags on. The seven-episode series probably could have been six.

And like Don’t Fuck With Cats, there’s a tacked-on bit of moralizing at the end, making us feel for the animals who have been background pawns in the entire ordeal between so-called animal lovers.

But the show is also an exceptional look at ’Murica. It doesn’t feel like a coincidence that Joe ran for president as an independent in the same election that saw Donald Trump defeat Hilary Clinton. Joe, who makes it his pastime to disparage a woman he sees as a threat, has a lot in common with the current POTUS. And as a journalist points out, Joe’s train-wreck election campaigns, first for president and then Oklahoma governor, were not only tolerated but welcome, because they were entertaining.

Just goes to show how much we let slide for that last reason.